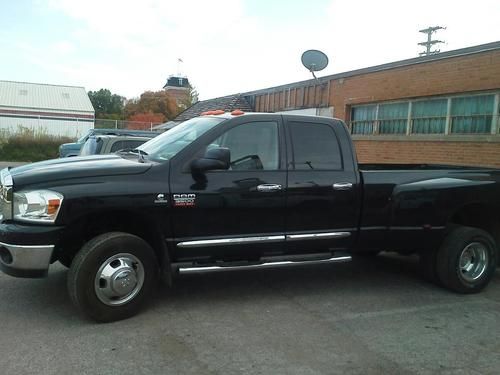 For Sale is a 2009 Dodge Four door 4x4 automatic with a 6.7 cummins with warrenty . The truck is in excellent shape, has good good tires, B&W goose neck hitch, Brake box, cruise controls and radio controls on steering wheel and many more. I have removed the EGR system making the 6.7 come alieve and adding fuel mileage. I installed 5'' straight pipe from turbo back with a Smarty JR. system and K&N air filter. This truck has never been pulled hard or drove hard. I use it to pull my 28' Fifth wheel camper I change the oil and filter every 3,000 miles and fuel filter every 6,000. It has 72335 miles and just changed the CCV filter.Their is a small ding in the front and back bumper also the top bed rail right by tailgate has a ding but nothing major . Please feel free to contact me for more info/pics. This is a very good truck I hate to part with it but just dont really need it any longer. The Truck is located in Doniphan Mo and prefer personal pickup only so there is no issues unless something is worked out prior. The truck is also listed other places and localy so I reserve the right to end at anytime.