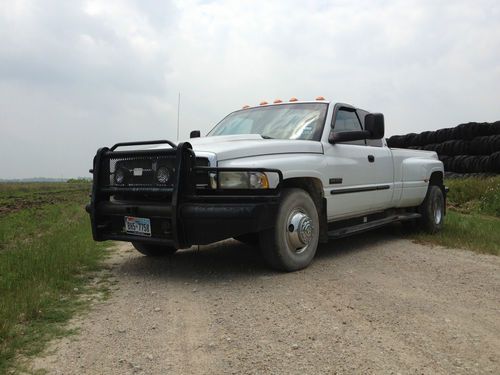 We are the second owners of the truck. We have owned it for the past five years and it has been used lightly. THIS TRUCK IS SET UP WITH MANY, MANY OPTIONS!!!TOO MANY TO LIST!!!Here are the highlights of this truck:*24V 5.9L Cummins Motor!!!!!*Engine was gone through at 205K and rebuilt. (Seals, Gaskets, Injectors, Etc)*Has steel brush guards on front and rear. (Maverick Brand)*Steel Side Steps (Maverick Brand)*Aluminum transfer tank and tool box with pump!!. *KC off road lights mounted on the front brush guard.*Gooseneck and 5th wheel hitch setup. *Trailer Brake Controller. *BANKS HIGH RAM INTAKE & EXHAUST SYSTEM.*BANKS BIG HAUS PROGRAMMING*External gauges mounted on drivers side A pillar. (Fuel Pressure, Exhaust temp, Turbo boost) The Exhaust Temp and Turbo Boost Gauges are not currently working. Fuel Pressure gauge works as it should. *Power Converter mounted under drivers seat. (DC to AC)*Diesel Pump mounted to transfer tank wired into truck electrical system.*FIRESTONE RIDE RITE AIR BAG SYSTEM with on board air compressor and air pressure gauge/controller. *Extended tow mirrors. *Back-Up camera.*Fold Down TV for back seat.*LCD Radio*BANKS EXHAUST BRAKE SYSTEM. (Jake Brake)*BRAND NEW BRAKE MASTER CYLINDER.*BRAND NEW DUAL FRICTION HEAVY DUTY CLUTCH. *6 speed manual transmission. *2 BRAND NEW BATTERIES with kill switches.*Freshly rebuilt transmission!! Only 100 miles on the rebuild!Now for the minor Issues with the truck. This truck is 12 years old so obviously its not perfect. *Has the typical Cracked Dodge dash. This one isn't near as bad as some but it is still cracked. *There are some minor scrapes on the exterior of the truck, the clear coat is peeling on a small portion of the hood. Approximately a 1 foot wide patch. *Back up camera goes in and out sometimes. *There is an electrical drain somewhere in the truck that will drain the batteries if it sits for a few weeks. We installed Battery cut off switches to stop this. This is only a problem if the truck is going to sit for an extended length of time. Overal this is a GREAT HEAVY DUTY TRUCK! It has been set up to pull/tow whatever you want. If you want more pictures or have any questions please feel free to ask. I have tried to cover everything.
The truck is located in Ferris, Tx, 30 minutes south of Dallas, Tx.  I have it listed locally and reserve the right to end the auction at any time should it sell locally first.
I can meet anywhere in the Dallas area for the sale.
Title states Rebuilt Salvage.
Approved Payment Methods:
Cash, Certified Check, Money Order.
WILL NOT ACCEPT PERSONAL CHECKS.
This truck is being sold Privately and being sold AS IS. No returns, refunds, or exchanges will be made.