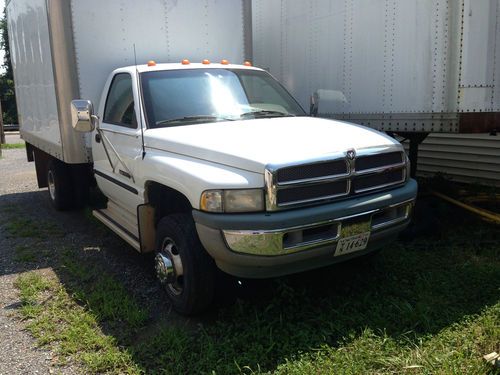 Condition: UsedA vehicle is considered used if it has been registered and issued a title. Used vehicles have had at least one previous owner. The condition of the exterior, interior and engine can vary depending on the vehicle's history. See the seller's listing for full details and description of any imperfections.Seller Notes:"Dash shell is cracked with some missing pieces. some paint has peeled off the back door. Interior cloth and carpet in decent condition except for small tear on drives side."

1998 Dodge RAM 3500 Cummins Turbo Diesel 12' foot box van. In good running condition with new tires. Has a hydraulic lift gate 1,200 lb capacity. Great for working out of and for moving. Recently had $3500 of mechanical work done, including new turbo, new cylinder head, and new radiator. Wooden shelves inside the box.