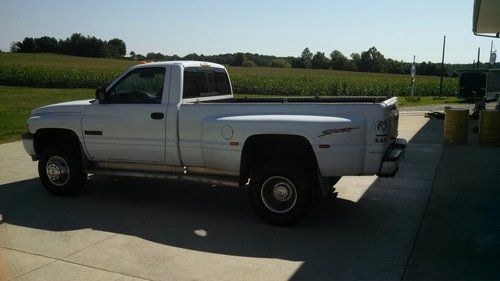 Condition: UsedA vehicle is considered used if it has been registered and issued a title. Used vehicles have had at least one previous owner. The condition of the exterior, interior and engine can vary depending on the vehicle's history. See the seller's listing for full details and description of any imperfections.Seller Notes:"Rear bumper is rusty. Abs light on in dash display."

1998 Dodge 3500 4x4 Dually Cummins Diesel. One owner. Original owner traded it in at my car lot last week. He bought it new in 1998. Runs and drives well. Has had a new clutch installed in the last year. Tires are atleast 75%. Interior is in good shape. Drivers seat is NOT wore out like a lot of other Dodge trucks. 5 speed manual transmission. Goose neck ball in the bed. Has an EDGE programmer installed. Rear bumper is rusty. Has ABS light on in the dash display. We are a car dealer in Brownstown Indiana. Come by and take it for a drive and check it out. I have described the truck to the best of my ability. As per company policy all vehicles over 100k miles are sold AS IS.  Indiana 7% sales tax will be collected.  812 358 3223. 812 525 4186