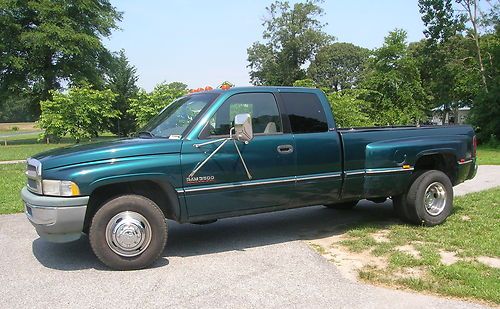 For Sale is a 1997 Dodge Ram 3500 Cummins Turbo Diesel Dually in great used condition! This truck runs and drives great with ONLY a

130, 823 miles!!!! The hitch has trailer brakes. Power windows and locks. Power seat on drivers side. Cruise control and cold A/C! The interior shows signs of wear but is clean! There are also some other cosmetic signs of wear on the exterior. The tailgate has a small rust spot (photo included) and their is a small piece missing from the tailgate handle (photo included). However the functional ability of the tailgate is not affected and still operates appropriately. There is a slight dent on the rear bumper. The passenger rear panel has some scratches. (photo included)
We are not the original owner. We bought the truck from another private seller. It has a clean title!!