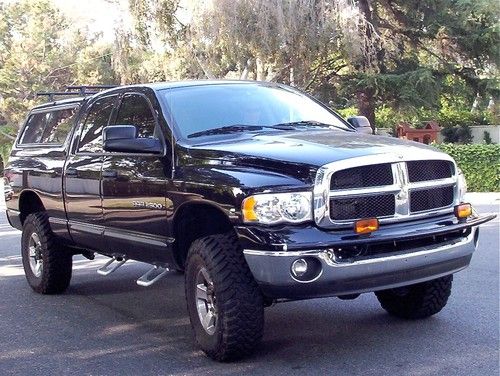 MORE PICS copy to browser:  s1100.photobucket.com/user/sandradee123/slideshow/2004%20Dodge        PLEASE ASK QUESTIONS BEFORE YOU BID ON THIS TRUCK! Thanks:)  This is my DODGE DIESEL 4x4 I am the original owner 57,850 miles! I am a diesel nut 40+years so I can answer all your questions . It has never pulled a trailer. It's always been kept outside so keep that in mind, but in great shape (not perfect) and all service has been done. It has Mobil 1 Heavy Duty Diesel Truck Synthetic in Engine.

-Truck has never had any problems but now drivers door cannot be opened from outside. Needs solenoid installed for door lock.  It's a common problem, but drivers door will be all fixed.
-Passenger Front Fold out mirror housing got hit with golf ball driving by a golf course(lucky?) so plastic has a crack in it however mirror is  fine.  Fold function, electric mirror adjust, is fine.
-Rear Bumper right has a very small dent right above hitch. (see pics)
-Tailgate left lower corner (right below Dodge 4x4 logo) is folded in slightly. These both happened in parking lot when a service truck backed in to rear a bit. You could fix or leave it as it does not affect anything really just cosmetic. (see pics)
Check out these awesome unique specs-  Do a search on all these unique add ons- Only the best!
2004.5 DODGE DIESEL with 325 Horsepower 600 ft lbs of torque, Automatic trans, Electric transfer case,  for clear floor area (opposed to manual trans, transfer case shift lever.
VERY RARE OPTION: BACK SEAT UPPER SIDE AIRBAGS!!!!!!
4x4 QUAD Cab SLT FACTORY "4X4 OFFROAD" "Factory Package"(skid plate etc)
Rear seats fold down into a deck platform very handy.
TOYO MT 35" Tires with 1/2 tread left. on 17" DODGE 8" ALLOY WHEELS + ALLOY SPARE  WHEEL W/35" Tire.
LEER TOP has Optional "YAKIMA EQUIPT" SPECIAL PACKAGE with awesome TOP of SHELL RACKS(removable), BIKE MOUNT(never used still in box), CAMELBAK  backpack water reservoir. all came with special order LEER Top.
BEDRUG a complete heavy duty carpet Bed Liner. All carpeted top to floor with top net for storing items. with TRIPLE 12V Plugs and dual inside dome lights!
BANKS High Ram Intake and Banks Monster Exhaust & Tailpipe, Banks Chrome 5"tip.
ROCHTECH Diesel Timing Device, puts timing correct for optimal fuel economy, cannot detect when smogging truck.
Factory Diesel Oxidation Catalyst is still installed so your good:)
KORE PERFORMANCE PACE SUSPENSION Front 3" Lift. Mini-Pack Kore@rear. 5100 BILSTEIN Shocks. DEFIANT front Bull Bar/Light bar with driving lights (not connected)
KORE BILLET DROP BLOCK makes Steering Geometry correct! plus BILSTEIN 7100 Steering Shock.
CARR ALLOY STEPS  front and rear!  the Best!!
I am the original Owner and truck has ONLY 57,850 miles on it. We have 2 other Mercedes Diesels to share for transportation, thats why very low miles.
If you buy this and you are out of state, picking up is your responsibility. If you fly to California, we can try to accommodate.