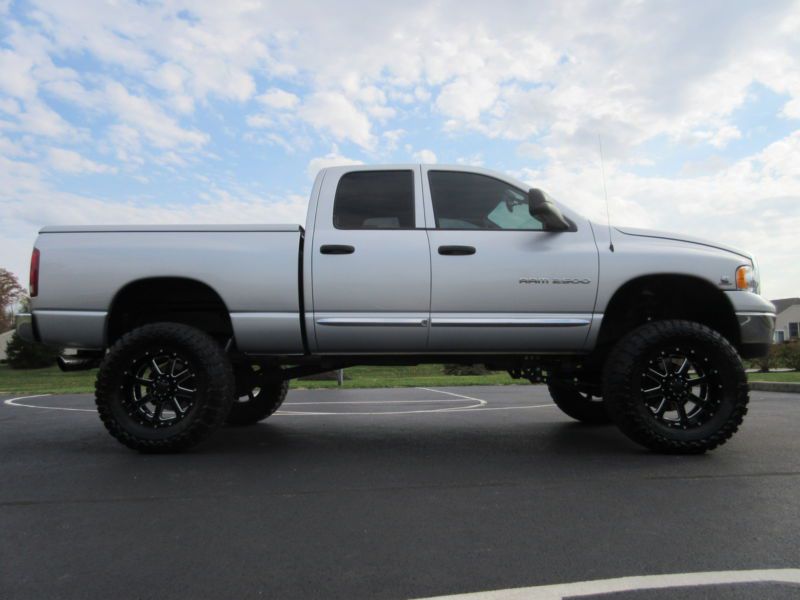 If you have any questions please email at: jessiapetrarca@netzero.net .

2003 Dodge Ram 2500 Crew Cab Cummins Diesel 24V with a Automatic Transmission, First thing i want to say the truck
came from down south so it has never been in the snow or has ever seen any salt. I am the 2nd owner i have owned it
for almost 3 years and when i bought it from the original owner it was completely stock. The truck is lifted using
TopGunCustomz 6" Long Arm Lift kit and has been on the truck for about a year now and been used for the last 6k
miles. I also installed their Dual Front Steering Stabilzer Kit. All of this was 3K for these parts and i installed
everything myself. All done correct and looks extremely good. The wheels and tires are Toyo Open Country MT
37X13.50X20" Tires and Wheels are Gear Alloy Big Block 20x10 Wheels, which have 6k miles on them as well. The truck
is always Garage Kept and Always Keep Super Clean. The front and rear axles have Amsoil Synthetic Oil in them and
the Trans and Transfer Case Have the Mopar Factory Fluids in them and was all Changed 15k Miles ago. The Engine i
use Amsoil Synthetic Oil and was just changed about 1k miles ago. The Interior is the rare Dark Black/Charcoal
Leather interior, there is one spot on the drivers seat from getting in and out that has rubbed a hole in the side
of the seat. The truck is super straight and only a few minor dings but very very straight. I had Dent Wizard go
over the whole truck when i got it. The paint is very good with only a few minor scratches but nothing big. Just
wanting to be honest and the truck is 14 years old. Tinted Door windows to match the rest of the truck. ARE
Matching Fiberglass Flat Cap that locks. Bed Mat in the bed. There is also a Edge Performance Programmer installed
on the truck that does all kinds of things and more than i even know what it can do but it shows are Exhaust temps,
trans temps, fuel pressure and so on and has 5 stages depending on what your using the truck for such as towing or
fuel mileage or just normal driving. Full MBRB 4" Stainless Exhaust from the Turbo Back. I replaced the Headlights
this past summer since the original ones were cloudy. Tow mirrors as well and Hitch for towing. A Big thing as well
is i had The Dodge dealer install a new Heater Core and AC Evaporator Coil Replaced when they had to replace all
the blend doors in the Heater/ac Box behind the dash. So heat and ac work perfect. The dash has zero cracks. I just
replaced both batteries. Everything on the truck works like it should and to be honest i know its my truck but it
would be hard to find a nicer truck that has been very well taking care of and never been abused.