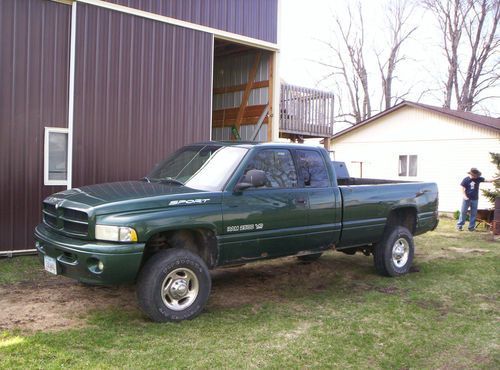 Today I have my 2001 Dodge 2500 4x4, xtended cab, long box,  4 door, Sport. The engine in this truck is blown up! Before you read any further I want to make sure this is understood! Number 4 clyinder has water in it and also  the oil pan is full of antifreeze. I think the rod broke in that piston and beat a hole in the cylinder wall. Now...the body is in good shape for it's age. Two rust holes in the cab corners on each side about as big as a fist. The box IS beat up but, was like that when I bought it. The tranny is only 3 years old and did shift and worked properly. The a/c compressor is out, went out just before it blew up. It will need new tires but, they are "E" series so should last a while. The truck still starts and runs but, I will not drive it more than 1 block to get it loaded up on your transport! You can see by the pictures the interior is fine! No holes or tears, radio works, windows, and all. I WILL NOT ARRANGE SHIPPING! Please ask any questions before you bid, once purchased it is yours to enjoy! $200 dollar deposit through Paypal required and balance upon pick up.This truck is located in Grandview, Ia.