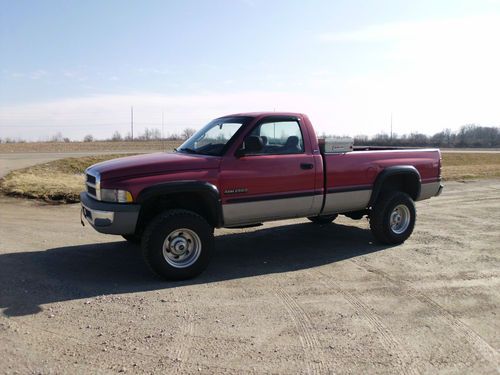 Up for auction is a good old truck...1999 dodge 2500 4x4 24 valve cummins turbo diesel 5 speed standard cab long bed...It has 178800miles on it.It has 3:55 gears and a posi rear....yes the 4wd does work!!!has brand new with approx 2000 miles on them 33x12.50x16.5 bfg a/t tires on it with weld roadhawk wheels ...Its never been boxed or chipped or anything....has stock air intake,injectors,turbo,fuel pump etc...It does have a new 5"diamond eye performance exhaust installed in dec 2012. which is straight pipe thru in thru only because the stock exhaust was junk....everything works on this truck...air cruise power windows locks and heated mirrors lights etc...has gooseneck ball and brake controller that works....Has brand new batteries just installed in january.This is not a show truck by any means, it has dents dings, a little rust,faded paint,peeling clearcoat....Now for the bad...It has an oil leak...but it is minor ...the vacuum pump leaks, dont go price one,its fixable and takes about two hours total and consists of an 8 dollar seal from cummins....Ive seen some online for 20-80 bucks in different kits but I know cummins sells it for 8 dollars...I have not changed it because its not that bad and I dont have time, also the park brake release handle is broke(common) bought a new one from dodge $40.00 and have not had time to install it.....but comes with the truck!! The other bad is the dash...its cracked and broke in several places....doesn't bother me but a new one can be had for $300.00 and is easy to install...I have a like new dash bezel for the truck also....This is a reliable truck that I drive back and forth to Ky and out and about...dependable,,,,and as the picture shows I have a clear title in hand and just remember that CASH IS KING!!! any questions or concerns call 614.296.6648...Matt....ABSOLUTELY no trades!!!! I dont wanna sell the truck but I need the money!!!! I have a family emergency that has resulted in me selling the truck....NO TRADES!!!!!!!!!!!!!!!!!!!!!!!!!!!!!!!!!!!!!!!!!!!!!!!!!!!!!!!!!!!!!!!!!!!