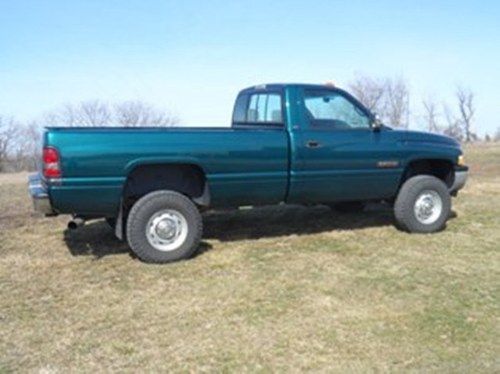 I wanted to paint the axles and suspensions, but wanted everyone to see it is all factory, showing factory paint and markings, decals and such on frame and under carriage, the truck has some scratches in the clear coat and some dings, but paint shines up nice (original paint).  No Goosencks or Fifth Wheel Hitches Ever.  The engine has had the valves adjusted about the 70,000 mile mark and has a TST products # 5 plate installed and timing set at 13.5 degrees.  Nothing radical for a Clean, Smoke Free, Reliable, Good Mileage, 275 HP - 625 Torque (Great Low End Response) Everthing else is stock right down to the Cat Converter and Exhaust, Over All the Truck is Tight and Reliable, and Has Been Very Well Taken Care Of.  It Always Starts Very Easy Right Off.  I am not trying to hide anything and I have described everything to the best of my ability.

P.S. I am not that great at texting or emailing so phone calls would be best if at all possible.

Thanks and Good Luck.

***A $1000 Non-Refundable Deposit Is Required Within 24Hrs of Auction End, The Remainder Must Be Paid Within 7 Days Of Auction End.***

***I Reserve The Right To End The Auction At Any Time.  Sold As Is With No Warranty***