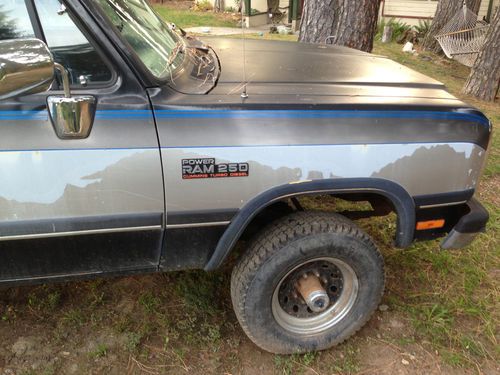 Condition: UsedA vehicle is considered used if it has been registered and issued a title. Used vehicles have had at least one previous owner. The condition of the exterior, interior and engine can vary depending on the vehicle's history. See the seller's listing for full details and description of any imperfections.Seller Notes:"There are a few dents, dings and scratches around the outside of the truck along with a few spots of rust none of which are major. The inside is in fairly good condition, no major rips of tears in the upholstery. I replaced the gauges with another OEM gauge pod from the same year of truck in an attempt to fix a few of the readings. I have the original gauge pod that shows the milage of 167,000 when it stopped reading."

You are bidding on a 1993 Dodge Power Ram 250 turbo diesel with tool box. I bought this truck 7 years ago from a shop where it had been sitting for a few years not moving with a brand new transmission in the bed. The owner of the shop professionally installed the new transmission after i bought the truck. This truck runs better then my 2008 Dodge Ram and im sad to have to sell it. The Odometer stopped working at 167,000 miles. I only drove the truck for 2 years then moved away and it sat for another 5 years. This would be perfect for a complete restore or to ran as is. There are no major issues, the biggest one im proud to say is that the stick is a little loose on the manual transmission.