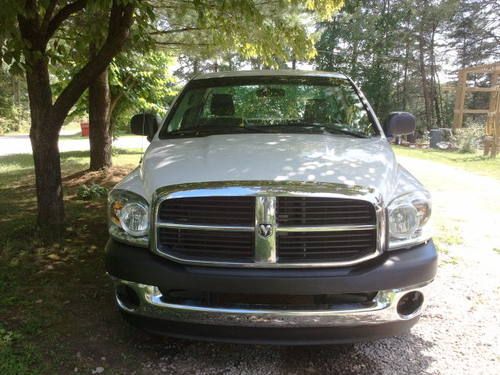 Condition: UsedA vehicle is considered used if it has been registered and issued a title. Used vehicles have had at least one previous owner. The condition of the exterior, interior and engine can vary depending on the vehicle's history. See the seller's listing for full details and description of any imperfections.Seller Notes:"2007 Dodge Ram 1500. Great truck.Everyday driver.Economical V6 engine. Long bed. Complete trans rebuild last fall. Also 4 wheel brake job, front shocks and front end alighnment at that time. Decent michilin tires. Has hail damage on hood that doesnt show up good in pics. Ky rebuilt title. Minor damage on right front fender. and tailgate. nothing serious. Duralined bed which is starting to come off in spots. 214000 miles but runs like new. Needs nothing mechanically. Just bought another truck or id keep it. If you want a good later model truck that u can actually use as a truck, this is it.NO RESERVE"

Good truck. Ky rebuilt title. Drives great. Runs great. Newly rebuilt transmission(6months old) with torque converter. Also front shocks, 4 wheel brake job and wheel alighnment in the last few months. The bed has been duralined and is coming off in spots. Minor damage on right front fender and tailgate. Aside from the cosmetic stuff this is a great truck. Perfect mechanically. No problems whatsover. Get in it and drive. V6 engine purrs like a kitten and has plenty of power. Great work truck. NO RESERVE so high bidder wins.