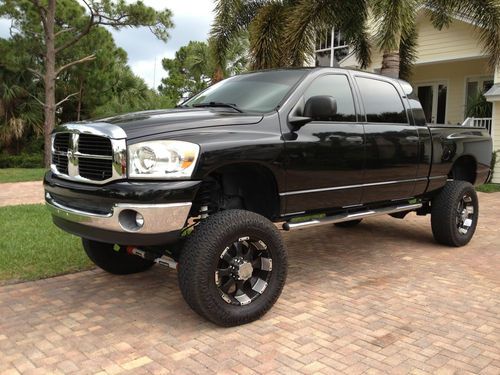 Condition: Used: A vehicle is considered used if it has been registered and issued a title. Used vehicles have had at least one previous owner. The condition of the exterior, interior and engine can vary depending on the vehicle's history. See the seller's listing for full details and description of any imperfections. ...
2007 DODGE 1500 4X4 5.7 HEMI MEGACAB
LOW MILES - ONLY 52,600!!!
GREAT CONDITION!!!!
So Here's the Deal!!! I bought his truck for my EX boyfriend....and now since he's gone I want IT GONE too!!!!
I don't know all the fine details....like exactly what kind of subwoofers or the name of the lift that was put on it. If you are local....you are MORE than welcome to come look at it. ANY questions please ask and I can try to get some of my guy friends to help:)
This is what I do know....
1400 SLT MegaCab
3/4 ton running gear
5.7 Hemi
9" lift with Air Bag Suspension
Custom sound system
DVD player with Back up camera
Custom Dual exhaust
Custom leather seat covers
Non Smoker
Very Clean!!!
Please feel free to contact me with any questions!!