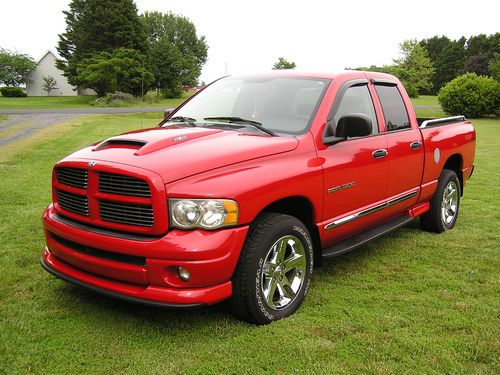 Condition: Used: A vehicle is considered used if it has been registered and issued a title. Used vehicles have had at least one previous owner. The condition of the exterior, interior and engine can vary depending on the vehicle's history. See the seller's listing for full details and description of any imperfections. ...
For sale, my very meticulously maintained 2004 Dodge Ram hemi sport 4X4 crew cab, I'm the second owner and I have owned the truck for almost 4 years,  the truck was sold new at McGee motors in Georgetown DE. To an older local gentleman .

My truck has NEVER had any paint work ever, the truck runs and looks fantastic as we were both very particular about keeping it in excellent condition ( never ever smoked in either )
My truck has never been in mud or on the beach. There is zero rust on my truck.

The truck has 120K pampered adult miles on it. I drive it everyday to work so miles may be slightly more by auctions end.
I average around 12,000 miles per year.
My truck is all stock, there are no modifications at all. ( has a Flowmaster )
engine compartment is dusty dirty some, I do not like to wet newer vehicles under the hood.

I only run Mobil 1 synthetic oil.
The trans has a had a fluid flush once.
The coolant has been flushed once.
The spark plugs were changed once.
The battery has been replaced once
The serpentine belt has been replaced once.
The front brakes were replaced once at 92k
I have replaced the power steering and cooler hoses with genuine Mopar parts.
I also had the rear end axle gone through and replaced the bearings etc. about a year ago. ( have receipt for a little over $900 ) ( when changing the gear oil we noticed some tiny glitter in the gear oil, so to be safe I had it gone through.
The truck is well equipped
5.7 hemi v8
automatic transmission
4x4
power windows
power door locks
speed control
tilt wheel
power drivers seat
cloth interior
remote keyless entry ( two keys and fobs )
power heated mirrors
am/fm CD/ cassette infinity stereo
tow package w/ class three hitch
optional 34 gallon fuel tank
3.92 rear axle
spray in bed liner
sliding rear window
40/20/40 front seat with large storage areas
seats six adults
overhead console
external temperature display , compass, mpg's etc.
dual air bags
20" chrome wheels
The personal changes I have made to the truck are as follows..

1. I Installed new factory "hemi" dodge challenger hood emblems on the trucks factory hood scoop.
2. I removed both of the factory front "hemi" emblems that were on the front fenders.
3. I removed the factory color keyed door moldings and installed new Mopar chrome Laramie moldings I purchased new from the Dodge dealer.( kept old ones )
4. I installed chrome door handle and tailgate handle trim. ( can be removed easily ) ( outer handle trim was not put on but buyer gets them )
5. I installed 4ea. tinted window vent shades.
6. spray in bed liner was done when the truck was brand new.
7. I installed a new brake box for towing .
8. When the truck was purchased new, it had a flow master muffler welded on, sounds great.
9. Last fall I purchased newer chrome 2009 Dodge Ram wheels and tires from a friend of mine that had removed them from his truck when new to put on aftermarket rims and tires. ( original 20" wheels clear coat was getting ugly )
10. I added a small "hemi" emblem to the left bottom corner of the tailgate.
11. I removed the factory color keyed taillight trim that is held on by 3m double stick emblem tape. ( they are included with the truck ) as seen in pictures
12. I installed a brand new pair of "Westin" chrome bed rails.
The truck looks and shines awesome, I get compliments quite often from many.
This is a used 2004 truck so it may have some very minor chips, scratches etc. ( you will have to look hard for any ! ) ( front bumper cover does have some bug juice staining in the clear )
You will not be disappointed what so ever in this truck
I have described my truck to the best of my ability.
If you have any questions please ask or call me on my cell ( 302-745-5190 ) ( John )
The truck is located in Milton DE. 19968
I have the clear De. title in my name in hand.
my black and white De. tag 27992 is NOT included in the sale!
Buyer is to send a $500 non refundable deposit through Paypal within 24 hours of auctions end.
Balance is due within 7 days of auctions end at the time of pickup unless other arrangements are agreed on by me. ( Cash or certified bank check )
If the truck is being shipped, the buyer is responsible for making and paying for all of the shipping arrangements. I will assist loading if needed.
IF YOU HAVE ZERO FEEDBACK YOUR BID WILL BE CANCELLED
IF YOU HAVE LESS THEN 10 FEEDBACKS EMAIL ME FIRST BEFORE BIDDING.