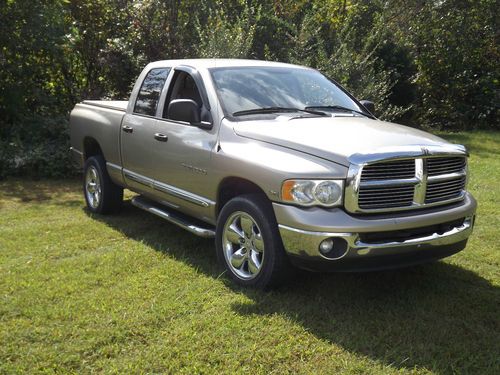 I am selling my dodge ram it runs great it is all wheel drive and can also be switched to 4 wheel low or high,it is the laramie model and has power pedels,radio controls on the steering wheel,6 disc cd changer,heated and power mirrors,infinity sound system,dual climate control for driver and passenger,leather heated seats,tilt wheel,ac,power windows and locks,bed cover,chrome bug shield,20" chrome rims and tires,nitrogen filled tires,auto darkening rear view mirror,it has 3000 lb helper springs on the rear,runs great everything works as it should with no problems and needs nothing

I bought this truck from the company i work for,A lady in the office drove this truck and she would drive from knoxville to nashville and drive it home this truck has had regular service done by the company.

The buyer is responsible for pickup