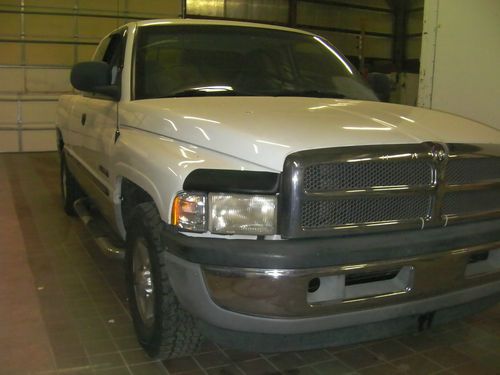 Condition: Used: A vehicle is considered used if it has been registered and issued a title. Used vehicles have had at least one previous owner. The condition of the exterior, interior and engine can vary depending on the vehicle's history. See the seller's listing for full details and description of any imperfections. ...
1999 Dodge Ram 1500 2wd strong smooth running 5.2 liter engine,smooth shift automatic with overdrive transmission. New replacement brake booster & other brake part's,solid sounding exhaust,tight quiet suspension. Tires are decent the front are not as good as the rear & probably will need changed in the near future. Side chrome step's are solid and safe to use,the body metal is solid with just a bit of surface rust on one fender and a dent at the driverside rear bed. The paint has various used vehicle ding's/ping's,scratches and scrapes,power window's work from both sides,driver side rear door is locked shut and the power door lock will not unlock it,perhaps a universal remote will do the trick. The front window has a small hairline crack,and the upper dash pad is missing. Interior is in good condition,air condition blows cool but not cold,I truly believe a charge will bring it back.Radio and all dash electrical switches work,the front end may need aligned it seems to have a little play. I've been driving this truck everyday and just took a 450 mile trip to northern Ohio in it,I had no issues at all and feel it is very dependable. This is a used vehicle being sold as is where is with no warranty. If you have less than 5 feedback please contact me prior to bidding for verification otherwise you and your bid will be blocked,this is a no reserve auction the highest bidder will win,the time to check out the truck in person is prior to bidding,there will be no joy rides after the auction ends just a simple transaction of money and title. You can bid with complete confidence, I have given a honest and as complete description as I can,there is a video link below as well and I encourage you to check the vehicle out in person.
value="http://www.youtube.com/v/ http://youtu.be/OYziZ5eCoRo?fs=1&amp;hl=en_US"><param