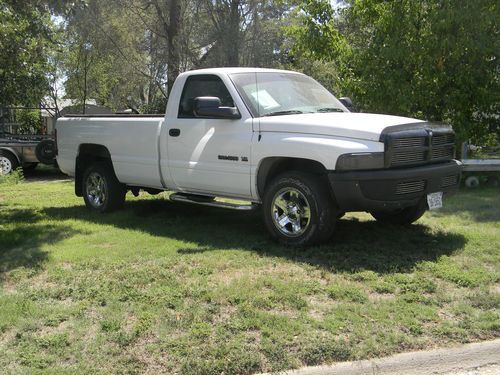 Body condition is far from perfect. There is lots of hail dents and other misc. dents and scratches. The drivers side rear cab corner is rusted through. The drivers side front cab corner also has rust.  A deer ran into my pickup which smashed the front divers side fender, door, grill, box, and broke the headlight and tail light. Also busted the windshield. I replaced the tail and headlight, grill, door and fender. They were green and grey so the door and fender were rattle canned white. I was able to pop out the dent on the drivers box side but it is not perfect.

Interior also is not perfect: the carpet and seats are stained. The seats also have tears in them. The dash however is in great condition. There are a few small cracks up by the windshield. I added a brushed aluminum gauge bezel.

The front tires are in good condition but both rear tires need replaced.  The wheels are off a 2005 dodge Durango limited.

Like stated, appearance and cosmetic needs attention but, mechanically it is rebuilt, replaced and reliable.

If interested please feel free to ask all questions

All incidents reported were all body related. No frame or structural integrity was damaged.