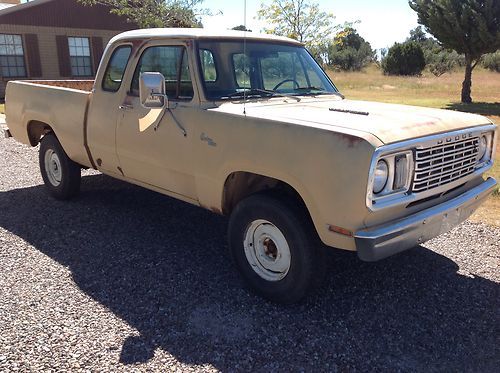 You are bidding on a 1977 Dodge W10  power wagon  club cab 4x4  4 speed  powered by 318 v8. I'm not a mechanic but I will do my best to describe this truck to the best of my ability.  Truck runs and drives good  surprisingly the steering is tight and it's not all over the road. Engine is quiet no exhaust manifold leaks will need some work past mufflers but truck is not loud. I've noticed no oil leaks on ground where truck has been parked also  doesn't smoke . Truck has A/C  and compressor kicks on but air is not cold  heat is not extremely hot either the switch that operates the blower motor has quit working and now a toggle switch below radio  turns fan on high & low . I'm sure it could prob use a  thermostat as gauge stays low. I would also recommend  all fluid changes and some new hoses as some look old and brittle . Transfer case hi-Lo loc work without any problems or funny noises  indicator light still works. All exterior /interior lights seem to work with exception of reverse lights ( might be bulb) blinkers do not cancel themselves you have to hold the lever. Has dual tanks and both work along with the gas gauge . Interior needs a little work seat needs recovered and jump seats in back need bolted back on frames and one is missing front legs Sun visors need work. Glass is good no cracks . Body is straight has a few small dents  (see pictures)  surface rust from thin paint and I've only seen one small hole on drivers front fender . Floors are solid  and doors close tight  and lock and unlock with ease. Weatherstripping could be replaced along with tires they are old 7.5x16. Tube tires. I would not trust the hoses or tires on this truck to drive across the country I would recommend you transport. If you need additional pictures or would like any more information please call me @ 575-534-9089  if you have zero feedback please contact me me before bidding . Auction can end any tine as I have the truck for sale locally