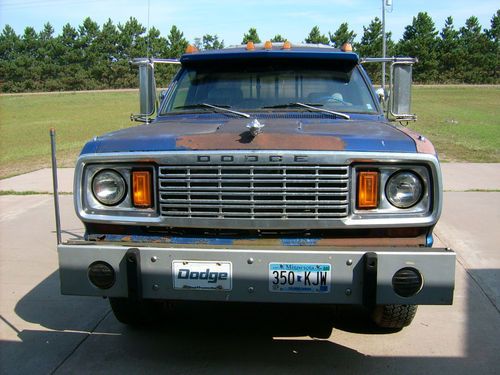 Condition: UsedA vehicle is considered used if it has been registered and issued a title. Used vehicles have had at least one previous owner. The condition of the exterior, interior and engine can vary depending on the vehicle's history. See the seller's listing for full details and description of any imperfections.Seller Notes:"rusty"

Up for auction is a 1974 Dodge 3/4 ton powerwagon Camper 7500  With a 440 engine 4 speed transmission 205 divorced transfer case with the dana 70 front axle that is the ball type cv joints thet run in oil rear is a dana 60 tires are good with half tread on goodyear wranglers 16 inch. the body is in rough shape except for the box that was replaced 4 years ago with the texas rust free one their is two used doors that go with but they aren't the best too. The truck was restored in 1988 and never stored inside so minnesota weather and mndot salt took its toll on it. truck runs and drives. I drove it home 50 miles for my fathers house with no problem but can't guarantee it.  Truck is SOLD AS IS  AND NO DELIVERY  MUST BE PICKED UP AT NOTHBRANCH MINNESOTA 55056 Any questions please ask