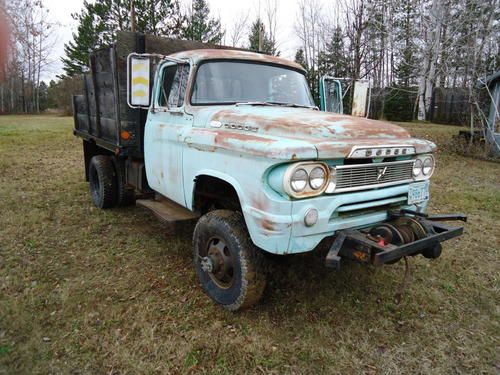 I have a 1959 Dodge W300 Power Wagon. It might of had the cab replaced with a 100 model. It has a 100 hood on it. Body is very solid with some fixable rust in the floor. Engine is out and in pieces in the box. Was a 318 V8. 4sp trans is also out in the box. There is an extra 4sp with it. Has a PTO driven winch and a dump box that is also PTO driven. One ran off the trans the other off the transfer case. Tires are 235/85/16 10 ply radials with good tread. There are some weather checks in tread. Title matches serial number on cab. Truck was last on the road in 2008. It's a very good truck to restore or put an engine in it and put it back on the road. Truck can sit here as long as needed to set up shipping as long as it is paid for at the end of the auction. I'm including 24 pictures so that will give you a good idea of condition. Email me with questions. Thanks for looking at the Dodge: