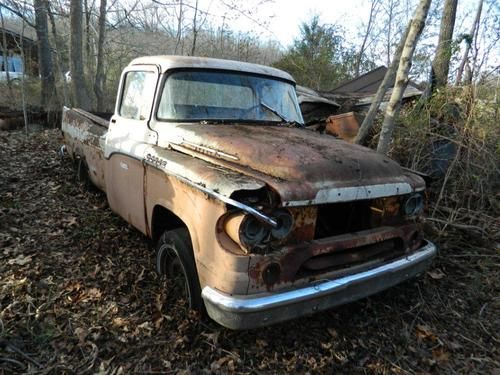 This is an extremely rare, and albeit extremely rough, 1959 Dodge Sweptside D-100 pickup.  My father purchased it in 1971 to use as a parts truck for his 1958 Dodge D-100 Stepside.  I am including BOTH vehicles in this auction.  The title for the '58 is clearly in my father's name.  The title for the '59 is in hand but was never transferred.  The Sweptside was only produced 1957-1959 with the total production in 1959 estimated to be less than 100!  The last estimate I've seen is there are probably less than 30 left in existance!  I have included photos of both trucks as well as two pictures of a restored 1959.  The drivetrain is no longer in the '59.  The winner is to send a NON-REFUNDABLE $500 deposit via PayPal within 48 hours of auction end.  The remainder will be due at time of pickup.  The winner will have 30 days to remove the trucks or the deposit will be forefit and the trucks relisted.  The buyer will be responsible for arranging the shipping.  I will be glad to make any and all reasonable accomidations to facilitate transport.  Please feel free to ask any questions PRIOR to bidding.  If your feedback rating is less than 10 please contact prior to bidding.