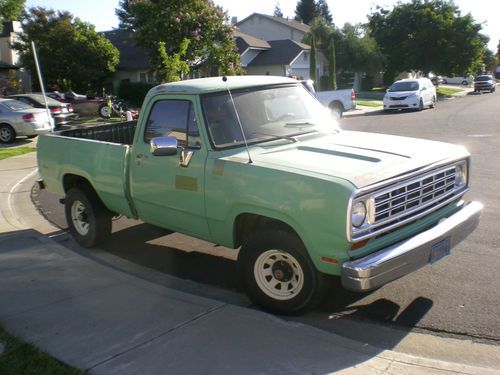 Condition: UsedA vehicle is considered used if it has been registered and issued a title. Used vehicles have had at least one previous owner. The condition of the exterior, interior and engine can vary depending on the vehicle's history. See the seller's listing for full details and description of any imperfections.Seller Notes:"Looks like original paint, some patina, dents."

I have up for sale a 1974 Dodge truck. I believe it was a fish and game truck but not positive. The previous owner installed the body parts on a 1994 Dodge chassis. The engine, trans and rear end are all 1994 vintage I was told. The engine is fuel injected with an overdrive transmission. When I got the truck the transmission made noise so I had it rebuilt at a local shop. The A/C is not hooked up and the blower is stuck on the defrost mode. The truck has power windows too. The truck has the 94 Dodge truck dash and gauges in it. There is a alarm system on the truck but I do not have a controller for it. The truck has dents and such as seen in the pictures but no hidden damage.  There has been some welding done by a previous owner as seen in the pictures. The engine and trans might be worth more than the truck as a whole but I am selling it as a unit. I was going to use the engine and transmission for a hot rod but those plans are on hold. The truck runs and drives good but does need some attention as it has not been driven much in the last 10 years. The truck has a clean Ca title and current plates. Please ask any questions about the truck a it is sold as is where is.