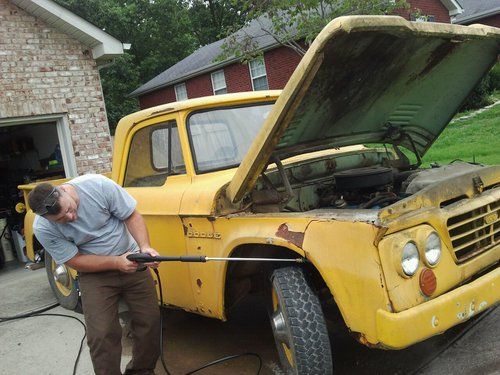 Condition: UsedA vehicle is considered used if it has been registered and issued a title. Used vehicles have had at least one previous owner. The condition of the exterior, interior and engine can vary depending on the vehicle's history. See the seller's listing for full details and description of any imperfections.Seller Notes:"OBVIOUSLY FROM THE PICTURES THE BODY NEEDS SOME REPAIR THERE ARE NUMEROUS SPOTS OF RUST TOO MANY TO WRITE DOWN BUT THIS TRUCK RUNS LIKE A CHAMP NEEDS A NEW SPEEDOMETER CABLE. NO BACKUP LIGHTS ANY OTHER QUESTIONS ON WHAT IS THERE OR NOT THERE JUST ASK. MILEAGE ON ODOMETER SAYS 98000ish BUT THATS NOT CORRECT DUE TO THE CABLE BREAKING I JUST HAVENT GOTTEN AROUND TO FIXING THAT PLUS WITH THE MOTOR BEING SWAPPED OUT BACK IN 1974 I HAVE NO WAY OF KNOWING THE ACTUAL MILES."

I HAVE A 1964 DODGE D100 PICKUP WITH A 1974 318 MOTOR, ORIGINAL 4 SPEED TRANSMISION WITH GRANNY LOW 1ST GEAR PRACTICALLY NEW TIRES NEW EDELBROCK INTAKE AND AIR BREATHER ALL NEW WIRING. NEW CLUTCH SLAVE CYLINDER.BOUGHT TRUCK TO RESTORE BUT I DO NOT HAVE THE TIME OR MONEY TO FINISH IT.CLEAR TITLE IN HAND
PLEASE DO NOT BE AFRAID TO MAKE AN OFFER ALL I CAN SAY IS NO.