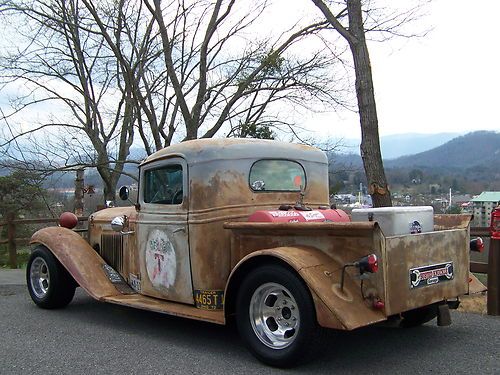 1934 INTERNATIONAL HOT ROD RAT ROD GANGSTER PICK-UP !!!! THIS TRUCK IS A ALL STEEL PICK-UP !!! IT IS ALL COMPLETE AND IS A GOOD DEPENDABLE  DRIVER THAT CAN BE DRIVEN ANYWHERE !!! YES FLY IN AND DRIVE HOME ANYWHERE IF YOU WANT TOO !!! IT IS SITTING ON A DODGE D-50 CHASSIE SO IT HAS A LOW STANCE BUT A GOOD RIDE !!! IT HAS A 327 SB. ENG WITH BORG & WARRENER 4 SPEED TRANS AND A BIG ALUMINUM RADIATOR TO KEEP IT RUNNING COOL !!! TRUCK NEVER RUNS HOT NOT EVEN SITTING AT RED LIGHTS IN THE HOT SUMMER TIME !!! IT ALSO HAS A RODCHESTER 4 BARREL CARB AND A ACCEL HEI HIGH OUT-PUT DISTRIB UTOR AND BUILT IN SUPER COIL !!! TRUCK HAS DISC BRAKES UP FRONT AND DUEL WILWOOD MASTER CYLINDERS AND HAS NEW DRUM BRAKES ON REAR !!! IT HAS NICE OLE SCHOOL ALUMINUM SLOT WHEELS AND 4 NEW COOPER COBRA RADIAL TIRES ALL THE WAY AROUND !!! IT ALSO HAS DUEL EXHAUST WITH GLASS PACK'S TOO !!!! TRUCK IS ALL STEEL WITH PI-TINA BUT COULD VERY EASILY SLICKED OUT AND SHINNY  PAINTED IF SOMEONE WANTED IT TO BE !!!! TRUCK HAS A COOL RED METAL GAS TANK IN BED AND A COOL OLD ALUMINUM  HIRES VINTAGE ICE CHEST TO KEEP YOUR COOL ONE'S IN !!!! TRUCK HAS A OLD COW BELL HANGING IN THE FRONT AND REAR ON TRUCK !!!! TRUCK ALSO HAS WORKING HEAD LIGHTS , TAIL LIGHTS AND RUNNING LIGHTS AND BRAKE LIGHTS TOO !!!! IT ALSO HAS A REMOVABLE STEERING WHEEL FOR FAT GUY'S AND HILLBILLY'S TOO !!!! SEAT IS IN GOOD CONDITION AND IS COVERED IN BLACK VINYL ALSO !!! TRUCK HAS A LOT OF NICK NACKS SUCH AS RAT'S AND METAL BOXES AND SO ON !!!! AND DID I SAY IT IS SO CLEAN ON BOTTOM SIDE YOU COULD TURN IT OVER AND EAT OFF IT !!!! AND IT HAS CHROME SHOCKS ON REAR TOO !!!!  THIS TRUCK IS A PROVEN SHOW WINNER AT CAR SHOW'S AND GET'S TON'S OF ATTENTION AND THUMBS UP EVERWHERE IT GO'S !!!! TRUCK IS VERY DEPENDABLE AND CAN BE USED AS A DAILY DRIVER AND IS ALSO VERY COOL FOR CAR SHOW'S AND JUST CRUZIN AROUND TOWN TOO !!!! SERIOUS INQUIRIES ONLY !!!!