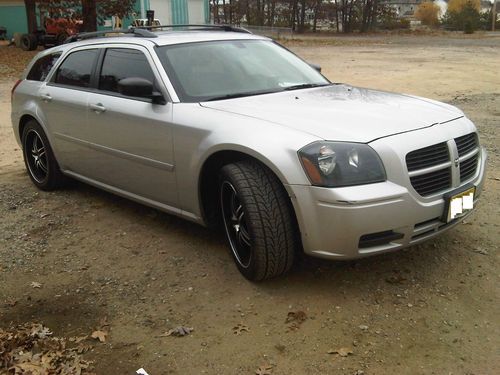 Here for Sale is a one owner 2006 Magnum Sport Edition with 20" rims and brand new low profile Nexen tires, This is equipped with the 2.7L V6 Mercedes Benz manufactured  Engine mated to an automatic transmission. The car looks as good in person as it does in the pictures. It has 152k Highway miles and looks/runs like it has Zero mile. Mechanically I cannot find fault with this car at all, It's engine has ran on Fully Synthetic oil right from brand new to date.The engine runs very quiet and smooth, and the overall performs is perfect. The transmission shifts just as it did when new. Driving down the road is as smooth as glass at all speeds. The tires are nearly new. Braking is smooth and even. Overall performance is impressive and the it's very nimble. The cosmetic condition of the car is fear. There are no signs of any prior paint work. Even usual wear one would expect is FAR below average and minimal at best. It looks as close to new as you'll find in a car its age. The interior is equally as nice showing virtually no wear. This was a NON smokers car and the lighter/ashtray have never been used. The upholstry, carpets, and dash are good and even the original mats are not bad at all condition. The pictures definately speak for themselves. The car is very nicely optioned boasting a power door, factory CD with premium sound, power/heated driver and passenger seats. This is nothing but extreme luxury.This car in my own opinion has the best Engine any car manufacturer as ever made period. I've drove 6.1L, 5.7L, 3.5L and 2.7L is the best of anything in Automobile. It save on gas better than 2.2L in Toyota Camry and Honda Accord.0 mile to 152K this car had ran on  5W20 fully Synthetic and nothing less, New brakes in all wheels, it has never asked more than oil change unlike other cars of it age.

The tires are new and the brake pads had just been replaced and had just had tune up job done.The Flaws:Couple of scraches on the front bumper and ding.If you are in the market for an upscale luxury or just an Extreme luxury cars, I would highly consider this one. This has been a well kept car and you will be hard pressed to find one any nicer for the moneyNote:
All no good feedback, zero feedback and new ebay members must contact the seller before bidding on this car otherwise your bid will be cancel and block from bidding on this car.