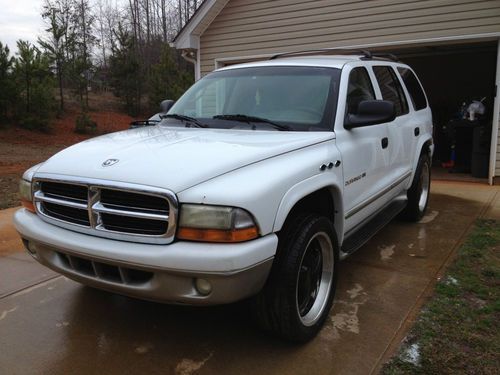 Up for sale is this 2001 Dodge Durango with the 4.7L V8 engine. First the good, Leather interior in excellent condition, non smoker vehicle, everything electric works on this truck from the power windows to the air conditioning. I bought a new truck and stopped using this one for about 3 years and when I checked all the power options everything was still in excellent working order. The transmission works great. Haynes Repair Manual included. Now the Bad, the truck needs some engine work. I took it to a mechanic and they told me the engine has a knock or rattle in it that could be the valves or a loose timing chain but they couldn't be sure unless they took it a part. I don't know much about that, I do know the truck starts and runs good but  it does have that engine noise present all the time. It has a front and rear air conditioning system but it needs to be re-charged. It has two new rear tires, the front ones have to be replaced soon. I have tried to show everything I can think of in the pictures including 2 small rust spots, one on then roof and the other on the left headlight. Like I said before, the truck runs good but I would have it checked out before planning a long distance trip. The longest I have gone since I recently started it has been 1 hour drive. I have never used the 4x4 and I thing the engaging motor is stuck because I can't get it to come on. This will be sold As Is for a very reasonable price to someone looking for a nice luxury SUV fixer upper. Local Pick up only, no shipping.