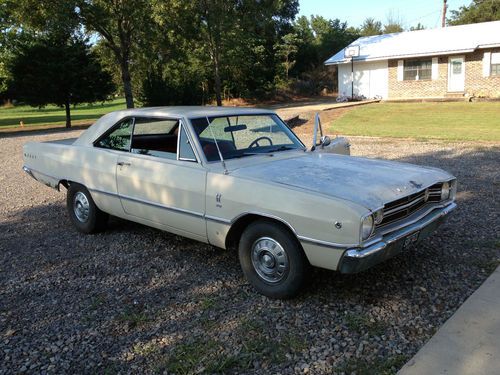 Condition: UsedA vehicle is considered used if it has been registered and issued a title. Used vehicles have had at least one previous owner. The condition of the exterior, interior and engine can vary depending on the vehicle's history. See the seller's listing for full details and description of any imperfections.Seller Notes:"ALL MATCHING #,s 1968 DODGE DART GT (RARE) 273 V-8 AUTO A/C BUCKETS W/ CONSOLE RUNS AND DRIVES GREAT IF YOU KNOW A DODGE COLLECTOR CALL THEM ON THIS ONE ALL ORIGINAL.THE CAR WAS BOUGHT NEW IN CA AND MADE IT TO AR, THEN SHE LET IT SIT,IAM SELLING IT FOR A FREIND THATS NOT COMP/SAVY. NO ONE HAS DONE ANYTING TO IT EXCEPT NEW BATTERY, PLUGS WIRES, NEW REAR SCHOCKS & PIPES. HE WAS GOING TO PAINT IT, BUT HARLEY WENT DOWN, RAISINFG FUNDS TO DO A MAJOR MAKE OVER ON BIKE. If NOT FOR THAT IT WOULD NOT BE FOR SALE, NOMAL SMALL RUST ON PASS SIDE LOWER REAR CORNER AND IS STARTING TO SHOW A LITTLE ON LOWER REAR WINDOW ENDS AND SOME ON FRONT BUMBER REFER TO PICTURES REAR SEAT LOOKS NEW HEADLINER GOOD FRONT SEATS NEED NEW BOTTOM COVERS. ALL IN ALL THIS CAR IS IN GOOOD SHAPE. NEEDS TO BE IN SOME ONES COLLECTION."

YOU ARE LOOKING AT A RARE FIND FOR A DODGE COLLECTOR, ALL ORINGANL MATCHING #,s 1968 DODGE DART GT 2DR,273V-8, AUTO TRANS,FRONT BUCKETS W/CONSOLE, RUNS AND DRIVES GREAT. NEW REAR SCHOCKS, NEW BATTERY, NEW PIPES, THIS IS A RARE FIND ,CAR FROM CAL TO AR THEN SET FOR A FEW YEARS NOW IS READY FOR A NEW COLLECTORS HOME WITH MINOR REPAIR. NEEDS PAINT SEE PICS FRONT BOTTOM SEAT COVERS, CARPET & ROOF LINNER LOOK GOOD REAR SEAT LOOKS NEW. DASH GOOD SHOWS 51332 ON ODOMETOR, GAGES ALL WORK LIGHTS WORK YOU CAN COME DRIVE THIS ONE HOME. RIGHT REAR LOWER QUATER NEEDS REPAIR RUST AND REAR WINDOW POINTS STARTING TO SHOW SOME RUST AS WELL FRONT BUMBER. EVERYTHING IS HERE TO MAKE THIS ONE A FAVORITE ALL THE WAY DOWN TO THE HUB CAPS.AS NOTED BEFORE THE CAR IS FOR SALE LOCALLY SO DO NOT LET THIS ONE GET AWAY WITH A LOW BUY IT NOW PRICE OF $6,500.00 WAY BELOW THE GOING MARKET PRICE. YOU CAN OWN THIS CLASSIC.

BUYER RESPONSABLE FOR ALL SHIPPING COST ,CLEAR TITLE , 10% DOWN WITHIN 5DAYS OF SALE BALANCE DUE WITHEND 10 DAYS OR BEFORE PIC UP.