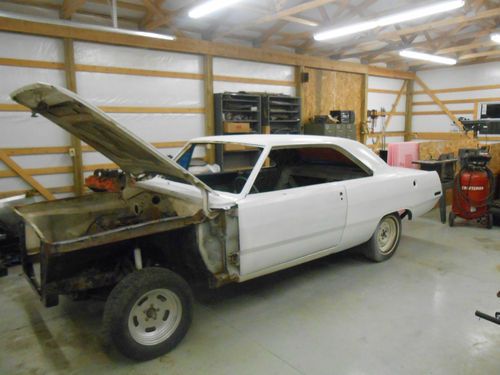 1970 Dodge Dart Swinger 2 door hardtop project.  Originally a 318/automatic car.  7 1/4 rear end with 10" drums all the way around.  Power steering and power brake car.  This thing is disassembled currently and has had body work started.  It is still in need of a lot of work.  It has some new metal and some patches that are very poor quality work.  It has a new quarter skin on the driver's side, and I have an uninstalled quarter skin for the passenger side.  The cowl on the passenger side is damaged and was patched and filled with duraglass.  The passenger front fender has some rust on the front behind the headlight bucket and next to the fender extension.  The exterior of the car has been sanded to bare metal and has 2 coats of 2K epoxy on it.

The interior is extremely nice for it's age.  Seats have a couple small tears but could easily be used for now and replaced later.  I have a brand new headliner and package tray for it.  It would need the dash painted, a new dash pad, and new carpet to be complete and very nice.  The hood has been drilled for scoops, and has a set of aftermarket 340 style scoops that go with it.

I do have a 318/904 that will go with it.  It ran, but lost oil pressure at idle.  Transmission worked fine.  The car is complete, but in lots of pieces.  I drove it before I pulled it apart many years ago.  I have a clear KS title in my name for it ready to be signed over.  Great restoration project or use it as parts for your current project.