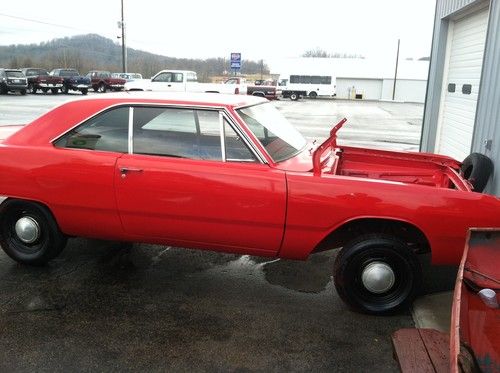 For sale a super rare Mopar 1968 Dodge Dart 2 door.I had intended to rebuild this for the strip however I have decided to sell due to illness.The car has had new quarter panels installed,has the tranmission hump for the 4 speed installed trunk is like new,has a 904 tranmission that goes with the car.All glass is intact and in good condition,I imagine that the glass would be hard to find.Windows roll up and down as expected.Having the body work finished is so much better than hearing excuses from the body shop.Has the 8 3/4 rear installed along with 5 leaf springs on each side in the rear for the proper stance.Also I have the GT hood in good condition has the side louvers for the 340 emblem or 383 if you want to clone a GTS.Overall most body work is completed and the car looks nice.The quarter panels installed and the paint job was almost $4100.00.I know I would get more finishing but I am 62 and my health will not permit it.These Darts are very hard to find,probally add an engine an a few other mods and you would have a nice rare car.I expect to loose money but I can't finish the car.So here it is for sale.I have been on E Bay for over 10 years with no problems so this should ease your mind.Look at the pictures and you decide if it is a car that you could use.Thanks any questions feel free to ask,have the bumbers and the car is full of extra parts.