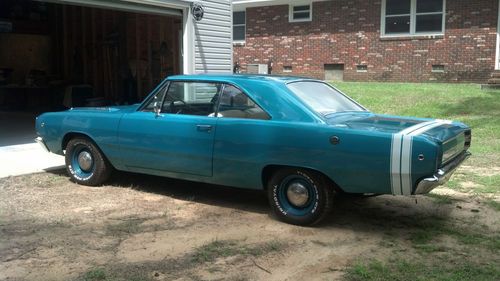 Condition: UsedA vehicle is considered used if it has been registered and issued a title. Used vehicles have had at least one previous owner. The condition of the exterior, interior and engine can vary depending on the vehicle's history. See the seller's listing for full details and description of any imperfections.Seller Notes:"1968 dart ,new 408 crate engine ,new jegs trans ,new front end rebuild , new rear with 3:55 gears , new hood ,new bumpers, new paint (2years putting car together ) new rear glass ,new seats interior , new exhaust .Car had no rust in body only small hole in spare tire area new wheel area installed . Headliner was installed ,but was not a good job may need to replaced all new seals .Lost interest in car good buy may trade for other car .have original title for car"