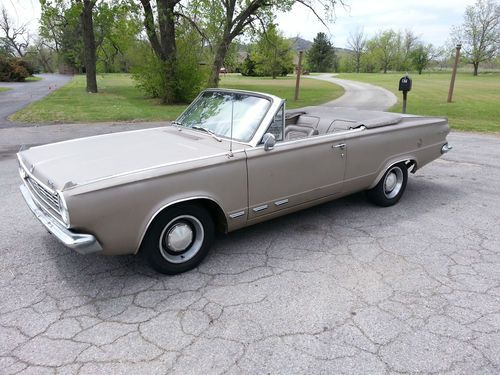 1965 DODGE DART GT CONVERTIBLE. YOU WILL HAVE TO LOOK LONG AND HARD TO FIND ANOTHER ONE LIKE THIS. SHE IS A TRUE SURVIVOR. NEVER BEEN RESTORED AND STILL LOOKS NICE AND RUNS LIKE A NEW ONE. THE BODY IS STRAIGHT, AND WHEN YOU CLOSE THE DOORS OR DRIVE OVER A SET OF RAILROAD TRACKS YOU WILL BE AMAZED AT HOW TIGHT IT IS. NUMBERS MATCHING 273 V8 WITH THE FACTORY OPTIONED 4 SPEED TRANNY. 2 OTHER OPTIONS ARE THE WOODGRAIN INTERIOR TRIM AND FACTORY UNDERCOATING. NOW BEING 47 YEARS OLD AND HAVING NEVER BEEN RESTORED SHE HAS A FEW ISSUES. PAINT IS DRIVER QUALITY, BUMPERS NEED TO BE RECROMED, TOP IS REPAIRABLE BUT IT'S MISSING THE REAR WINDOW. ONLY RUST IVE FOUND IS A COUPLE OF SPOTS ON THE REAR QTRS, THEY CAN BE REPAIRED WITOUT REPLACEING THEM. ALL GUAGES WORK RIGHT DOWN TO THE OLD SCHOOL MOTOROLA TACH. NOW AS FOR MYSELF IAM LOOKING FOR A NICE CLASSIC PICKUP, SO A TRADE IS POSSIBLE. IF YOU HAVE QUESTIONS PLEASE SEND ME AN EMAIL. THANKS FOR LOOKING AND GOD BLESS.