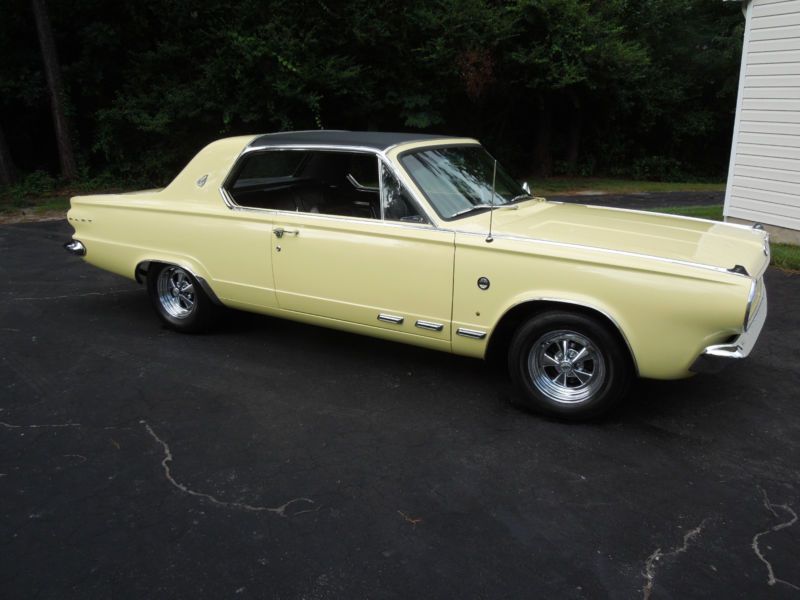 This is a completely restored 1965 Dodge Dart Charger with only 480 being badged as Dart Chargers it is extremely
rare. There is only a hand full known to still exist. It has just 8 weeks been completed and has less than 1000
mile on the engine. I have tried to return this car back to its original condition as much as I could.
Drivetrain: Engine and transmission are the original ones. Rear end is not. I think it is from a late 60's Dart
or Plymouth A body but not sure. It has a 355 gear with Positive traction. It has all new bearings and brakes. The
engine has been totally rebuilt with .030 oversize pistons 9.8 compression ratio. ( original ones were 10.5 to 1)
The engine still has the break-in oil in it. Cylinder heads have hardened valve seats for use with unleaded gas
and have been completely rebuilt. Transmission has new synchronizers and bearings. It has a new clutch and
pressure plate. It had been converted to duel exhaust when I bought it and I returned it back to the original
single exhaust from Accurate Exhaust at a cost of $800. I repaired the original resonator which was supplied with
the car when I purchased it. Suspension: All new shocks. Complete frond end rebuild. All suspension parts bead
blasted and painted. The underside of the car looks as good as the top. Body: Sheet metal was in very good
condition except around the windshield. The rusted parts were cut out and new metal welded in to make the repair.
New windshield and rubber were installed. Driver and passenger floor pans were replaced. 1 small patch behind the
rear wheel opening was repaired. All other sheet metal is original. Vinyl top was replaced by the previous owner
before I purchased it. Not sure how old it is but looks new. The body had a few small dents but no other rust. Front and rear bumpers have
been rechromed. Taillight bezels rechromed. Interior: The dash pad has been recovered. It had a small crack
near the middle. The instrument cluster and all 4 trim pieces have been rechromed and detailed and looks awesome.
Door panels, Front seats and carpet are all new. The headliner, back seat and package tray are original. Arm rest
bases have been rechromed. Side and rear glass is original and in great shape. 4 speed shifter plate has been
rechromed and detailed. Shifter is original. Wheels: 14" X 6" Cragar SS. This car came from the factory with 13"
Cragar SS wheels which are unattainable at this point. Tires are like new.
All weather stripping has been replaced. It took me about 16 months to do the restoration.