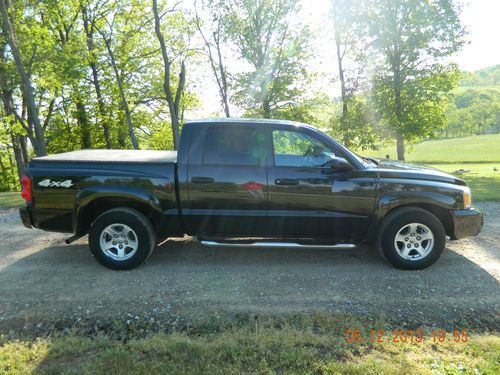 IT HAS 40211 MILES, IT HAS A REBUILT TITLE, THIS MEANS THAT THE TRUCK WAS DAAGED AND REPAIRED. THE TRUCK HAS BEEN INSPECTED BY THE OHIO STATE HIGHWAY PATROL AND CAN BE TITLED,REGISTERED AND INSURED IN ANY STATE LIKE ANY OTHER VEHICLE. ALL OF THE REPAIRS WERE MADE, THERE WAS A LITTLE BIT OF DAMAGE TO THE FRAME. WHICH I TOOK TO A PROFESSIONAL BODY SHOP AND HAD THE FRAME PULLED, THERE WAS NO KINKS IN THE FRAME, IT WAS SWAYED OVER JUST A LITTLE BIT. TOOK THE THEM ABOUT HOUR IN HALF TO FIX.

I PUT A LEFT FENDER, HOOD, LEFT HEAD LIGHT, GRILL, BUMPER AND A COUPLE OF PIECES OF THE RADIATOR SUPPORT.

TRUCK DID NOT HAVE ANY AIR BAG DAMAGE. TIRES ARE ABOUT 35-40 PERCENT, THE WHEELS DO HAVE A FEW CURVE MARKS ON THEM, BUT THEY ARE NOT BAD.

THERE IS A FEW DINGS AND SMALL DENTS, YOU ARE GOING TO HAVE THAT FOR THE YEAR OF THE TRUCK.

IT HAS  MANUAL WINDOWS AND LOCKS.

IT HAS PIPE RUNNING BOARDS.

HAS A COVER ON THE BACK OF THE BED. IT ALSO HAS A SPRAYED IN BED LINER. THE COVER DOES HAVE 2 SMALL HOLES TOWARDS THE BACK, THEY ARE ABOUT A 1/2 INCH LONG.

THE INSIDE HAS A FEW SPOTS, BUT STILL LOOKS GOOD.

I HAD THE TRUCK ALLIGNED AND IT TURNED OUT GOOD, I HAVE PICTURES THAT SHOW THAT EVERYTHING IS IN THE GREEN.

IF YOU DON'T HAVE THE MONEY PLEASE DO NOT BID.

BUYER IS RESPONSIBLE FOR PICKUP OR SHIPPING THE TRUCK.

IF YOU WOULD LIKE TO COME AND SEE THE TRUCK OR DRIVE IT, FEEL FREE TO EMAIL ME SO WE CAN MAKE ARRANGEMENTS.