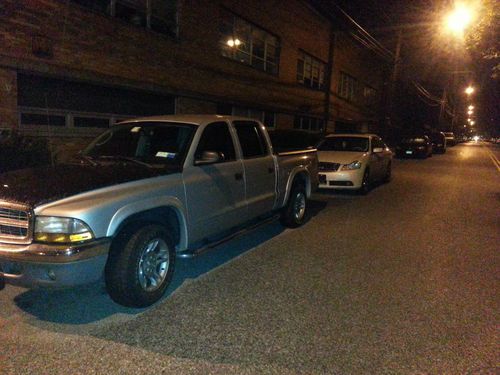 Condition: UsedA vehicle is considered used if it has been registered and issued a title. Used vehicles have had at least one previous owner. The condition of the exterior, interior and engine can vary depending on the vehicle's history. See the seller's listing for full details and description of any imperfections.Seller Notes:"Someone backed up into the front of the car very lightly which broke the grill and dented the hood. New grill and hood installed. Hood is painted flat black to match to hard bed cover."

I am selling my 2004 Dodge Dakota SLT, 4.7 Liter 8 cylinder, 5 speed manual transmission, aftermarket Flow Master cat back dual exhaust, hard tonneau cover by "Undercover", K&N Cold Air intake, JET Performance computer chip, tinted windows, Kenwood head unit with single cd, Polk speakers.  I love this truck and I DO NOT want to sell it but my wife does not drive stick so I need to get something that is automatic.  It runs great, has excellent power and good gas mileage for the power.  I have never had one single problem with this truck.  My father bought it new and gave it to me in 2010 before he passed away.  There was a very light hit on the front end because some moron backed into me while the truck was parked.  The grill cracked and the hood buckled a little so I replaced both pieces.  I left the hood flat black because it matches the tonneau cover and it looks pretty good.  They don't make the 8 cylinder 5 speed combo anymore.  I don't really know why because it is a great combo in a truck this size.  This thing really moves.  Contact me with any questions.