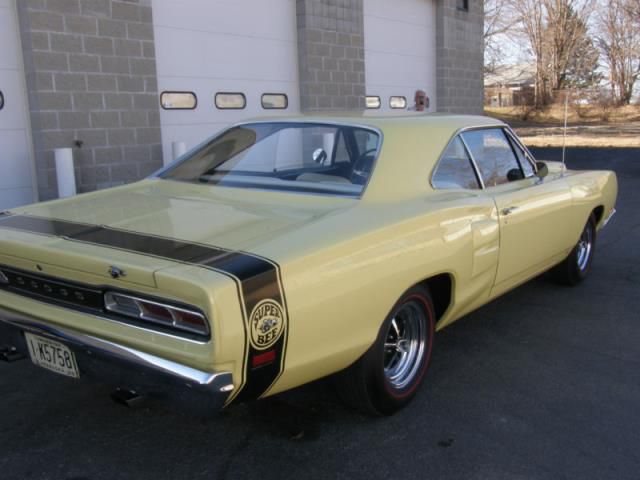 1969 Dodge Coronet Super Bee 2 door hardtop. 383, factory 4 Speed car. Darn near perfect! Original engine and transmission. Partial VIN on both and casting dates are correct. Partial VIN on radiator support. VIN tag itself looks to have never been off. Correct rivets. It’s real! Original fender tag. No build sheet found. Factory N96 Ram charger hood. Original M46 side scoops. No power steering or brakes. AM Radio. Sure Grip with 3:91 Gears. She's a beauty. This very solid original sheet metal car was a drag race car in Colorado for several years. It was restored here in Omaha about 8 years ago. It took about 3 years to do it. Has pretty much sat in a collection since restored. The Bee has driven about 300 miles or so. All panels appear to be the factory panels. Note the factory "tabs" on the bottom of the rear quarters. Original Y2 yellow with white and black interior. The car is all the correct shade of Y2 Yellow. A few pictures were taken indoors and the cameras flash makes the yellow look darker. There was over $78K PLUS in restoration costs. That’s when he stopped counting. Money meant nothing to this collector / builder. Over $20K in paint / rotessorie alone! Dead straight body! High shine gloss body! Pretty much everything is new. And I mean everything! From the dome light to tires. Front bumper to rear. Headlight, tail light bezels, re chromed bumpers, complete interior from Legendary. Door frames were base coat clear coated. Dash, dash pads, glove box, gauges, radio, console top, wooden steering wheel, all trim was polished. Glass is new. Door handles, mirrors, the complete Ram Charger set up is new. And on and on. The engine was rebuilt as well as the transmission and rear end. The engine has a Mopar performance 440 steel crank. All comp valve train. Many performance parts in the engine were used. All done right! And all stock appearing. The sure grip rear end gears are 3:91’s. The original 4 speed was gone through. High performance parts through out it too. 15 inch red lines with magnum wheels. Non radial red lines. Front suspension rear suspension all re worked. See under body pictures. Could use 4 wheel alignment. All drum brakes. The Trunk floor excellent, the interior floors excellent. There was a roll bar in the car and the two mounts were repaired behind the bucket seats on the floor. Again this was a very solid car when it was being restored. Under the hood all appears as it did when the car was new. Wires, clamps , hoses. The car has been driven, so not perfectly fresh but darn close. See pictures. The battery is new. The under body looks as nice as the top, well close. I had a leaky transmission seal were the drive shaft mounts and got some fluid splashed about. I cleaned it all. However there is some staining on the exhaust. Some steel wool should fix this. To sum it up you have a car here that’s a beautiful example of true Mopar Muscle. Numbers match from what I see and its just about darn near perfect. You are welcome to have it inspected or come see it yourself. This is a 7 day auction. If you need any further information please call me anytime at 402 659 1118. I'm in Omaha Ne. Close to I 80. This car is immaculate. This fine car is being sold “AS IS”. I represent everything I own and sell as best I can.