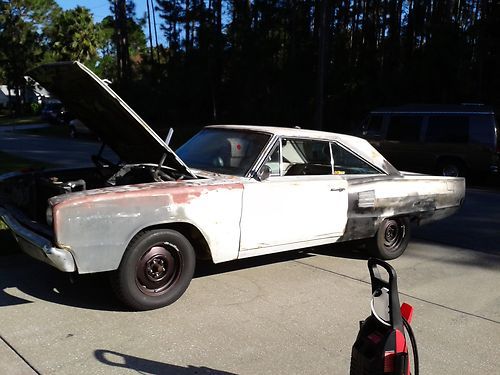 I purchase this car approximately a 2 years ago, and i have no time to complete it.  When I picked up the car it was sitting in a outside storage place, covered but outside, this car needs floor pans up front, and a trunk pan.  Also the driver side frame rail has about 4-5 inches of rust that I would say needs repair.  The body otherwise is ok, not perfect but, at this price it is a classic that can be done if you choose to do so.  I have all the parts to put it all together.  A lot of parts would need to be replaced if you want to make it a show car, but my plans were to make it a prostreet and race it on the weekends at a local track.  The car was running when I purchased it and the motor looks like it just needs to be driven.  It needs brakes, it needs to be gone thru to make it safe and driveable.  It sounds like a mild cam someone put in.  I have the original radiator, but I removed it, cause I was preparing to put another big block in it.  All the tires are new and balanced.  The interior needs to be redone, the dash is good the gauges are all in good shape, the seats are being reupholstered and will be done by the end of april, they will be the original white, with the 66 style trim, the door panels I did not remove yet..The original automatic shifter is there in good shape but no console, I was going to put a Hurst shifter in place of it anyway.  I also have the mini tub kit, the leaf springs can be moved in for a fatter tire in the rear.  Currently I removed the intake manifold and had it blasted and cleaned, its an orig Chrys Edelbrock intake that works great on the 400ci motor.  I dont have the history on the motor but it sounds great.  I was going to put this motor aside and use my 440ci i have.
please check out the pics
this car is in need of resto so please contact only if youre serious....
SAMMY 386-864-0394
A new battery and several new parts are being included with the car. All 4 tires were just put on a few weeks ago.  I also have a new windage tray, the one in the pic is trashed.
I have a video of the car running, but you may not be able to view it from your computer or phone.
If you come to see the car you can watch and hear the video on my phone, its too large to attach to a text.
(if you cant see it from either of the links, try adding www or https //, etc.) if youre logged in to facebook try this:
facebook.com/photo.php?v=10151119474404229
If you dont have facebook try this one:
facebook.com/photo.php?v=10151119474404229&l=7891763054143356349