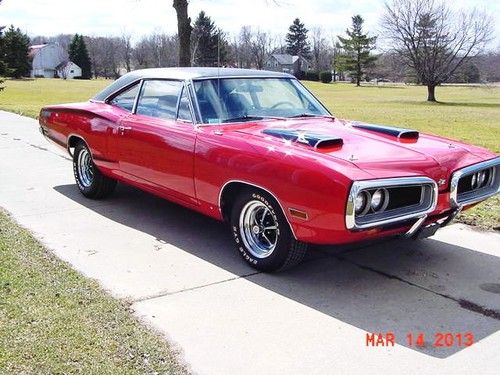 This is a Real 1970 Dodge Super Bee N96 Air Grabber Hood 383 car, I have the original numbers match 383 that goes with the car, it now has a built 440 in it and i have the recipt for the motor with total 5500.00 in motor alone, the car runs great and sounds great, it has the functional factory air grabber hood, and has an 8 3/4 3:23 posi rear, the car shows 89000 miles but actual mileage is unknown, the motor has about 1000 miles or less, this car is 1 of 1254 ever made and in exceptionally great condition with all original body panels, this car has no blisters or rust and the undercarriage and trunk are in great condition, the paint on the car is in great condition it has had a repaint and was painted the original color, it has new upper and lower control arm bushings and a new battery, it has the original radiator, with power steering, the car has no build sheet but it has the fender tag and the codes on the tag are as follows.........V1X.....N96.....FE5....H2X9.....TX9.....C12.....E63.....D32..., Again this car is 1 of 1254 ever produced in 1970 and is exceptionally nice and runs and drives great, the interior is in very good condition as well, The car has rechromed bumpers and all the trim on the car is in great condition, this car is for sale locally so i reserve the right to end the auction at anytime, this car is sold as is with no refunds or warranties, if your looking for a nice Super Bee this is the car, for more info call 330-990-8800 my name is Dale, Please Serious Bidders only, Thanks for looking.