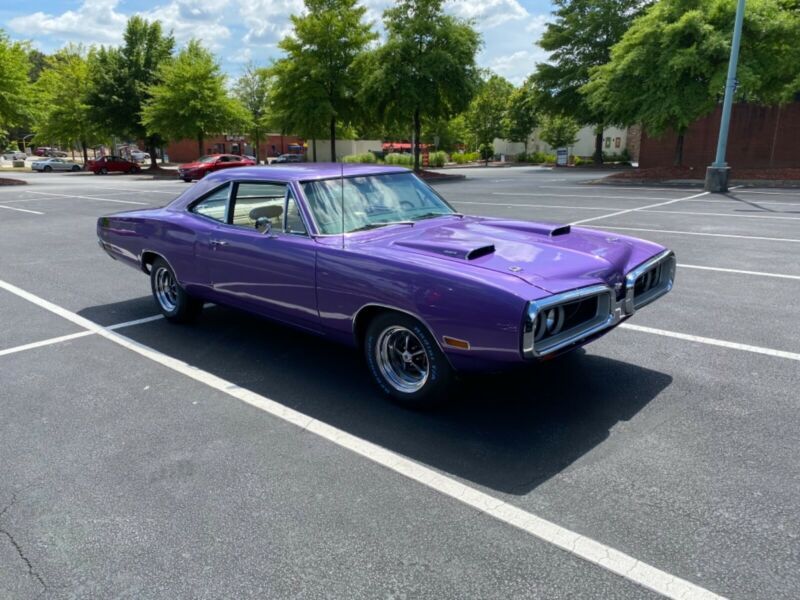 up for sale a 1970 dodge coronet superbee coupe. The car has a rebuilt and balanced 383 it has cc’d
rebuilt heads with roller rockers and hydraulic lifters. Also an aluminum intake with new holley 750cfm aluminum
street dominator carburetor. It has high temp starter and a power master 140 amp chrome alternator and mad blaster
2 coil. We added a new radiator and fan set up as well as classic auto air air conditioning.New hedman headers and
borla exhaust. The brake system has been updated with wilwood power brake master cylinder with 11inch slotted and
drilled rotors on the front disk brakes. Upgraded suspension with hotchkis sway bars and all new shocks. Also
includes all new powder coated front suspension parts and bushings. The car comes with a rebuilt 727 torque flite
transmission with a 2400 torque converter. The 8 3/4 rear end was dropped and powder coated. It has 3.23 positract
gears. The drive shaft was taken out balanced and reinstalled with heavy duty u-joints. It has a new set of 8x15
magnum 500 wheels and B.F Goodrich tiresthe paint is F-7 plumb crazy with a white interior. Has a front bench seat,
wood grain steering wheel and new roll dial am/fm radio. The underneath of the car was sand and stripped then
repainted with east wood under coating. The fuel tank, fuel lines and fuel pump were all replaced with new parts.
This car has undergone a nut and bolt mechanical restoration and is a great running car. The paint and interior was
done by the previous owner is not perfect although in good condition and the paint is very sharp but driver
quality. This is an awesome non numbers matching car and is among one of the rarest dodges. A true coupe with
defining side pillars and pop out rear windows.