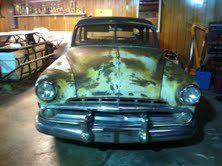 1951 Dodge Cornet. this car is strait  and solid. car has very little to no rust. bought the car with dreams of building a vintage race car, after the car got to the shop we quickly realized that this car was way to nice for that. car has a clean title. The motor is a Flathead inline Six. I have looked over the motor and it looks it may have been rebuild not too long ago. the motor needs minor work to make run like plugs, wires and some minor carb work.. The interior of the car is pretty much shot but all the seat frames are still there. The dash is in amazing shape has all the original knobs switches and gauges. This car would make a great ratrod or would be the perfect for a ground up restoration. I don't know the exact mileage of the motor. if you have any questions please feel free to contact me. (843-247-6636) or bb.motorsportszero@gmail.com.