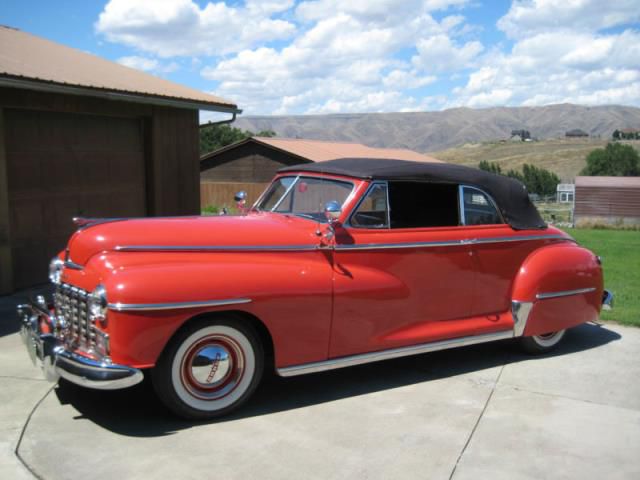 FEEL FREE TO CONTACT ME AT ANY TIME WITH QUESTIONS : roscoeroderick8@laposte.net

1948 Dodge Custom Convertible. It was the cover and the feature car on the 1986 September issue of Cars Parts. This car was restored in 1982 and only 8429 miles were put on the car in the past 34 years. The car has every option that was available in 1948, dual mirrors, dual mopar spotlights, dual mopar fog lights, grill guard, trunk guard, back up light, factory turn signal, windshield washer, clock, radio, heater, and electric power canvas top. I'm probly forgetting some. The car also has the Fluid Drive but a overdrive from a 1954 Dodge has been installed for even better cruising. Everything works on the car even the under hood lights when the hood is opened. The engine #D24515915 was rebuilt when the car was restored and starts easy and runs strong. It has a split manifold with dual exhaust and sounds very nice. (not loud) The body is as nice as I have seen and paint is very good with only a couple of bug nicks the size of a pin head.