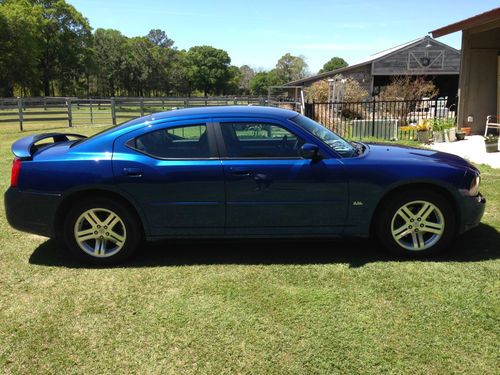 Condition: UsedA vehicle is considered used if it has been registered and issued a title. Used vehicles have had at least one previous owner. The condition of the exterior, interior and engine can vary depending on the vehicle's history. See the seller's listing for full details and description of any imperfections.Seller Notes:"One owner before me. Oil changed every 3,000 miles. Well-maintained inside and out. Never had any problems whatsoever. Clean carfax. Asking payoff amount."

Selling my 2010 Dodge Charger SXT. Blue in color. 3.5 High Output V6 engine. 26 mpg highway. 5-Speed Automatic. CD Player, Bluetooth and U-Connect equipped. Sirius Satellite Radio-ready. Black interior, cloth seats with Leather accents. Has 99,000 miles, was a 1-Owner before I purchased, CLEAN CARFAX. Newly replaced factory 18" wheels and new tires. Factory spoiler. Well taken care of. Big car with a large trunk and plenty of space, great for traveling. Oil changed regularly. Car has never had ANY issues. It's been a wonderful car for me. I am in college now so I cannot afford it any longer. Selling for payoff. E-mail me for more info, thank for looking!