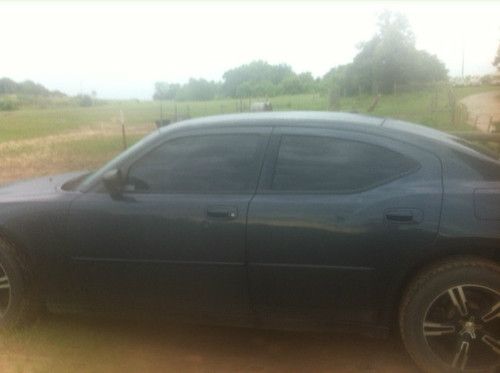 Condition: UsedA vehicle is considered used if it has been registered and issued a title. Used vehicles have had at least one previous owner. The condition of the exterior, interior and engine can vary depending on the vehicle's history. See the seller's listing for full details and description of any imperfections.Seller Notes:"good condition! normal wear and tear. There is a scuff on the bottom the drivers side fender where it was scuffed on the wooden fence post at our home."

This is a 2007 Dodge Charger SXT, blue grey in color. It has extremely dark tinted windows and after market factory rims. 18 inch I belive. It has normal wear and tear but the only scuff/scratch/is a scuff on the front fender where I got too close to our wooden fence post at the house. I have been the only owner of the car since I bought it brand new at Fowler Dodge. I has 186,000+ miles however all are highway miles. My job requires I travel all over so it got driven for that purpose only. It gets detailed 2x a month to get it sharp. It has electric windows, locks, seats, etc. It has CD player and MP3 hookups...Grey interior. It makes a great car with great gas mileage.