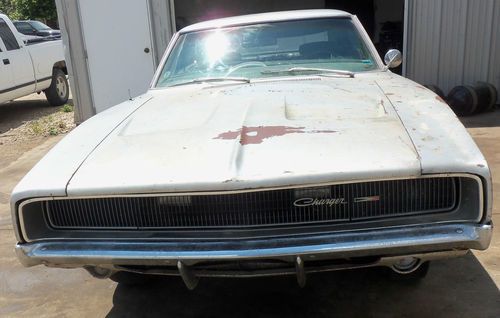 Condition: UsedA vehicle is considered used if it has been registered and issued a title. Used vehicles have had at least one previous owner. The condition of the exterior, interior and engine can vary depending on the vehicle's history. See the seller's listing for full details and description of any imperfections.Seller Notes:"There is some rust starting to show on rear bumper and down low on body as seen in pictures. Paint is peeling on the hood, some tears in seats, small hole on passenger rear. There are no keys."

UP FOR GRABS IS A 1968 DODGE CHARGER TWO DOOR HARD TOP. THIS WOULD MAKE SOMEONE AN EXCELLENT PROJECT CAR. THE ENGINE IS SUPPOSE TO BE A 383, BUT HAS BEEN CHANGED. THERE ARE MARKINGS THAT SAY 440 SO AM ASSUMING THAT IS WHAT IS IN THE CAR NOW. THERE IS PAINT PEELING, RIPS IN SEATS, AND SOME RUST STARTING. THERE ARE NO KEYS SO CANNOT CHECK THE ENGINE TO SEE WHAT IT SOUNDS LIKE. IT ALSO APPEARS THERE HAS BEEN SOME QUARTER PANEL WORK DONE ON THE CAR. TITLE IS CLEAR AND IN HAND READY TO SIGN OVER TO THE LUCKY WINNER!

THIS IS A NO RESERVE AUCTION. IF YOU HAVE ANY QUESTIONS PLEASE ASK THEM BEFORE PLACING YOUR BID. IF YOU NEED TO TALK WITH SOMEONE GIVE ME A CALL AT 816-721-4767.