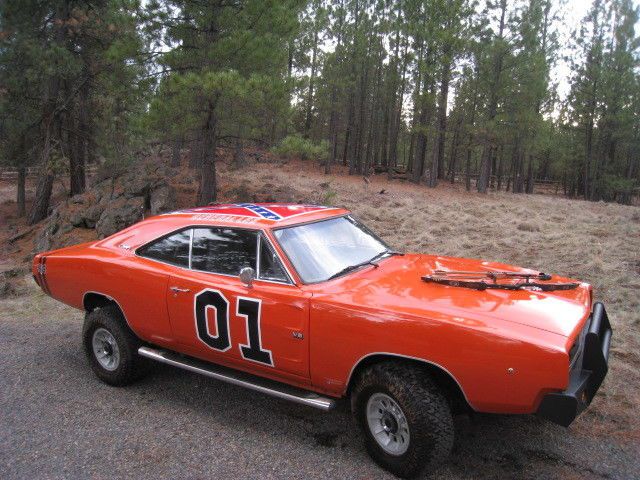 Custom built 1968 Dodge Charger. The previous owner, after watching an episode of the Dukes Boys in which the
General Lee was turned into a 4x4 to chase some Jeeps decided he wanted a 4x4 General Lee of his own. So he found
a Charger body that was missing its floor....as well as a few other items and grafted it to a 2000 Dodge Durango
4x4 complete floor pan, frame, firewall, all running gear, seats and digital dash. The donor vehicle has fuel
injected engine, abs brakes, disc front brakes, air bags, cruise, tilt wheel, a/c, heat, 7in monitor with
cd/dvd/backup camera capabilities,Bluetooth capabilities and 10" subs with 750 watt amp. The tires are Dune
Grappler tires ordered straight from Nitto and a brand new extra tire in trunk. Engine is a 4.7 V/8 Auto
transmission.
The ending result is the style of a classic car, but the drivability and comforts of a new one!
It is autographed (and cleared over) on the trunk lid by Bo(John Schneider), Luke(Tom Wopat), Daisy(Catherine
Bach), James Best(Sheriff Rosco), Sonny Shroyer(Enos Strate), Rick Hurst(Cletus) and Ben Jones(Cooter). The car
also comes with a compound bow with fake sticks of dynamite is also signed by Tom Wopat and John Schneider.
Since I have owned the car I have gone through most of the suspension bushings, front shocks, replaced the a/c
compressor, built a custom bumper that is powder coated and recently replaced the top vinyl decal. I purchased a
complete decal set for the car so it comes with spare decals for the doors, trunk and the General Lee for the roof.
The car also comes with various new door and window seals. I also replaced the door hinges with new and doors
close very nicely. Also has a new battery. Currently there is 135000 miles on it and it runs flawlessly. The car
is very presentable and nice looking from any angle. There are a few small bubbles on the car and body filler used
as gauged from a magnet. The only real gripe I have is that the 4x4 shifter linkage was modified and likes to
argue to go into 4 wheel drive. The transfer case is fine…it’s the linkage that binds.
Driving this car brings a great big smile to your face....not to mention all those people you pass. There isn't a
day that I drive the car where I don't see a camera phone pointed in my direction....so you had better be a people
person if you buy this car. The exhaust has a very nice sound. Car is titled as a 1968 Charger and the title is
free and clear.