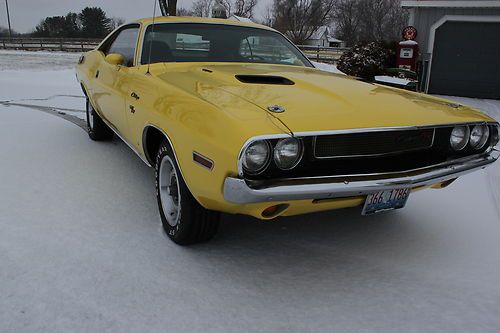 FOR SALE  is my 1970 Dodge Challenger that i have owned since 1979. This is a very solid clean car it came from the factoy has a 440 r/t auto. The 440 motor that is in the car now is not number matching  and the auto was replaced with a  4 speed long ago i do have the auto pedal assy for the auto that will go with the car if the buyer wants. The 750 Holley carb was just rebuilt along with a new gas tank. the motor is pretty much stock other then the carb, intake, and a cam that is a little rough @ idle but not bad. The paint job is straight and looks great it is the color the car would of came from the factory with (FY1) and was painted about 6 years ago. This car is very drivable it could use a new pair of bumpers and trim rings on the wheels and the chrome on the trail lamps is getting a little pitted but still looks good. All the light work along with the speed o and tach, water temp and oil pressure but the clock does not work. This will make someone  very nice driver that will turn heads. I will hate to see it go but i feel it is time to let someone else enjoy it has much i have. This car will be sold were is has is and buyer must provide shipping. No out of U.S. sales. Buyer must depoist $500 into paypal within 3 days of winning the bid. I can send more pics text me @ 815 979 2872