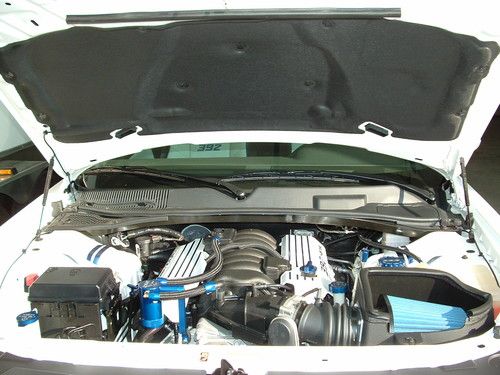 THIS IS # 827 OF 1100, ONLY 550 WHITE, THIS CAR IS TRICKED OUT, ALL CUSTOM UNDER THE HOOD WITH ALL THE BLUE BILLETT ADD ON'S PAINTED TO MATCH ENGINE COVERS, AND STRUT COVERS,MATCHING AIR AID COLD AIR INTAKE SYSTEM, 6.4 HEMI HOOD EMBLEMS, SRT8 DECK LID EMBLEM, CUSTOM EMBROIDERD FLOORMATS WITH #827 LOGO, CUSTOM PATCH WORK ON INSIDE OF DECK LID TO MATCH, CAR COVER,MOPAR MUD FLAPS FRONT AND REAR, CAR HAS ALL THE OPTIONS, INCLUDING MOPAR STEREO WITH SUB WOOFER, ALL THE FACTORY BUILD SHEETS, FRONT LICENSE BRACKET NEVER MOUNTED, CAR IS FLAWLESS AND BETTER THAN NEW, THE ENGINE COMPARTMENT IS 1 OFF, FACTORY WARRANTY TILL MID MARCH 2014, MUST SEE!!!!!!!!!!!!!!!

A larger front splitter and integrated front fender spats give this Challenger SRT8 392 better overall high-speed aerodynamics and balance. A newly modified front fascia chin spoiler improves aerodynamics and is accent painted for a more aggressive look. The rear decklid spoiler also is completed in matching body color, and the Mopar logo is etched onto the rear quarter window.

Pumping out 470 horsepower and 470 lb.-ft. of torque, the newest HEMI engine in the SRT product lineup provides an additional 90 lb.-ft. of torque at 2,900 rpm versus the previous 6.1-liter V-8 engine and still deliver up to 23 mpg. The added torque allows for inspired standing starts and improved straight-line performance while new, performance-tuned motor mounts improve idle stability and ride control at any speed. An active intake manifold and high-lift camshaft with cam phasing provides maximum low-end torque while optimizing high-end power.

This SRT8 392 is has the standard Tremec TR-6060 six-speed manual transmission that was first offered on the 2008 Dodge Viper SRT10®.