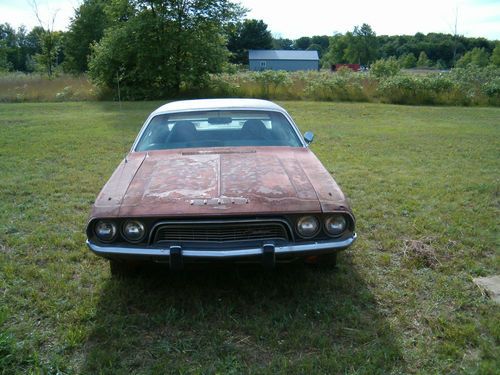 Condition: UsedA vehicle is considered used if it has been registered and issued a title. Used vehicles have had at least one previous owner. The condition of the exterior, interior and engine can vary depending on the vehicle's history. See the seller's listing for full details and description of any imperfections.Seller Notes:"Lots of rust, but its all there. Car needs restoring. Car is not drivable, and will have to be towed or trailered."

Selling my 1973 Dodge Challenger. Car came with a 318 engine. Overheated it at about 85,000K. Bought what I was told was a rebuilt 1970 340 engine that was a spare for a Gold Duster. Engine came altogether except for intake and carb. Put the intake and two barrel carb from the 318 on it. Also changed out the 1970 distributor for the 1973 electronic one. I think that 1970 was the last year for the high conpression pistons. Has Slap Stick 3 speed automatic transmission. No power steering but has air conditioning. Was hit in the back drivers side panel, when it was fixed the split inner fender leaked and caused the drivers side back floor board to rust thru. Have picture. The other floor boards and trunk are ok. Parked the car car after that. Car ran and was drivable when parked. Hasn't been started for a while. Dash has split in it, along with seats. Lots of rust. Frame has some cancer, mostly right under where the battery goes. Have picture. Not sure what all would have to be replaced on it. Would need some work to restore it, but it is all there. Had some local offers on it, so I know it can be restored. Have clear title in hand. Car will have to be towed or trailored. Buyer is responsable for pick up, no shipping. Have any questions, Please ask. Thanks for Looking