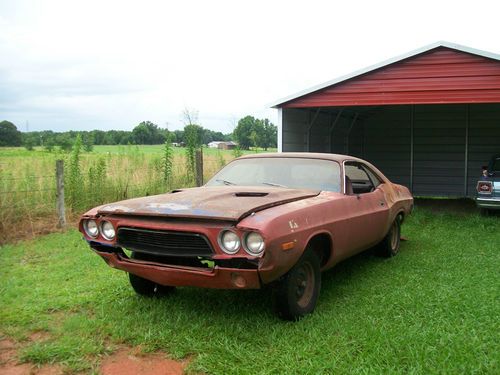 Up for bids is a solid 1973 dodge challenger. The car is a factory 318 four speed car. But I do not have the engine or transmission. The car needs total restoration. I pulled it from a barn around a year ago but don't have the time to restore it. All the glass is there and in fair shape. I have a lot of extra parts quarter windows, steering column, Various chrome, wiring harness, and a solid RT hood. All of which go with the car. The frame rails are solid. Needs driver side floor pan. Both lower quarter panels and trunk drop offs. Also needs a patch panel on passenger door. Trunk lid is in good shape. All interior door panels are solid but need painting. I don't have any gauges. The car was an original vinyl top car. Front disc brakes. manual steering. Please feel free to ask questions. Car is for sale locally so I reserve the right to end auction early. More pics available upon request. Clear SC TITLE in Hand. Thanks for looking and good luck bidding.