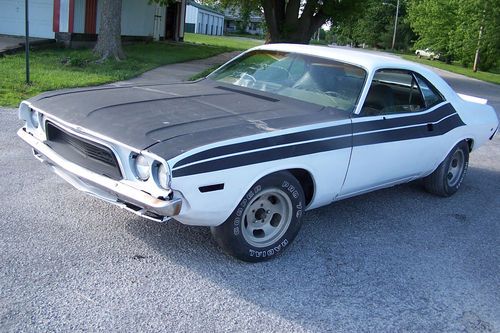 THIS IS A TOTAL PROJECT CAR! NOT RUNNING! IT NEEDS LOST OF RUST REPAIR..ALMOST EVERY EXTERIOR PANEL WILL NEED WORK OF SOMESORT..SEE PICS!

THE IMPORTANT METAL IS GOOD,SOLID FRAME RAILS AND SOLID COWL ,  DASH NOT RUSTY AND FRONT APRONS ARE SOLID...(SEE PICS)!!!! THE REST OF THE EXTERIOR IS ROUGH*** FLOOR PANS ARE SHOT (HAVE PANS CUT OUT OF ANOTHER CAR JUST SITTING N CHALLENGER IN PICS. QUARTERS ARE ROUGH, TRUNK HAS RUST ETC. BUT ONCE AGAIN IT DOES HAVE GOOD RAILS ,COWL AND FRONT APRONS.

NO TITLE..SOLD WITH BILL OF SALE

NO CHECKS WIRES OR PAYPAL