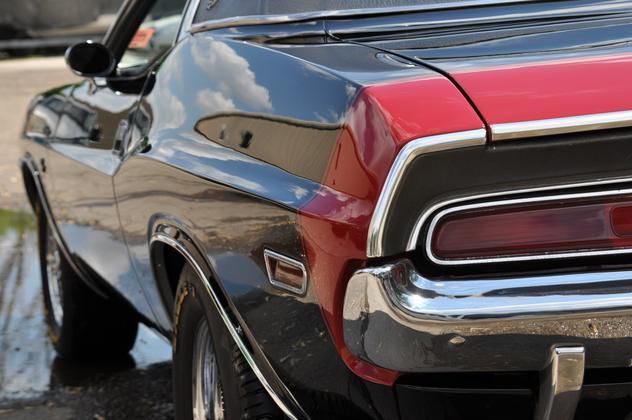 If you have more questions or want more details please email : coryhulsizer@juno.com .

Absolutely Awesome
1970 Dodge Challenger R/T SE
Nut & Bolt Frame-up “Old School” Build
1of 202 FE5 R/T SE’s Built
1 of the Best Anywhere
440 SIX PACK V8
Velvet-Touch Clutch
HEMI 4-Speed Transmission
4:56:1 Sure Grip DANA 60 Rear
Triple Black 1970 Challenger R/T SE Cedar Rapids, Iowa“Not only is this car is fully capable / worthy of setting in a collectors show room but, is for the
“discerning collector” that wants to live the experience not just stare at it”
The first thing that hits you as you walk up to this 1970 Challenger R/T SE is it’s Presence, Rake and the two
Black & Red “power colors “Only 1 in 100 cars will deliver on this. The Black TX9 is very intimidating and the
Red Fe5 Bumblebee Racing Stripe warns you of the sting that this 1970 Challenger R/T SE is capable of delivering.
Dodge had it right when they introduced the Bumblebee Striped Super Track Pack cars.
After you close the super straight doors and sit down inside a cockpit where the timeless good looks of American
muscle meld seamlessly with tasteful upgrades and modern information delivery systems, you are instantly
“teleported” into past memories as you inhale the smell of a new car of yesteryear. Inside, you’ll find the
original black interior dressed up in fresh leather. The door panels are original, seats are new, the carpet is
new, the dash is new, and, well you get the point. The full center console frames the factory Dodge Hi-Performance
“pistol grip” shifter perfectly.
As you wrap your hand around the shifter grip you stare momentarily at the 5 inch Auto Meter Pro-Comp II Tachometer
with its shift light and tattletale. The three well mounted 2-5/16” 270 degree Pro-Comp gauges, all the controls
for the boost pumps, and aux-lighting you find conveniently located just under the dash. Placing your left hand at
the One O’clock position on the black 3-point soft-touch sport steering wheel..., for a moment...., you imagine
yourself accelerating down the local drag strip stirring the gears after an eXplosive launch.
The original 8-track is gone, but there is a Vintage Premium Sony XR Series AM/FM Cassette Stereo radio in its
place. You quickly locate your favorite radio station and immediately realize the premium sound system. Overhead,
a restored info-center consolette finishes off the fighter-cockpit-like instrumentation. Like I said, this is a new
car in every way, and it is as nice as they come and you haven’t even started it.
“Anyone can own a car, anyone can drive a car. But, at the end of the day it is about how the car makes you
feel”
As a dedicated vintage gear-head who sweats BRAD PENN Racing Motor Oil, I offer to you, inve$tment grade “Detroit
Iron” and a first class muscle car that defines the term "muscle car".